I really enjoy Jiamusi taxis, the huge fleet of beeping, swerving, blue-and-white VW Jettas, hell bent on getting where they want to go in as short a time as possible, pedestrians be damned. The combination of no-tipping and no-chatting, often combined with a loud radio and a brusque, no-nonsense attitude really suits me. I think I would catch them everywhere if I lived here, to try and make up for the fact that they are so cheap, their prices don’t seem to be in proportion with anything else.

Our trip to Wanda, the shopping centre near where Kitty lives, was another knuckle-whitening adventure of near-misses that all seemed to work out fine. Then, with a flash of a WeChat phone screen (11 yuan, or $2.50 for the 15-minute drive), we alighted in front of the second miniature Eiffel Tower I have seen since arriving…this one emblazoned with ‘I DO’.

Across the road is where Kitty has been living since September, in the bedroom of a student who has recently moved to Italy on an exchange of his own (if only everyone could go on exchange).

‘I can see my room from here!’ she tells us, ‘Look, third building, eighth floor, right there.’

Sure. Yes. See if you can pick it. 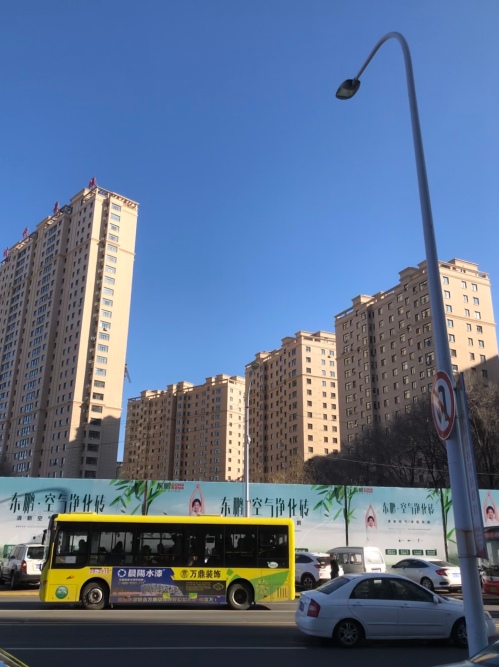 Wanda is clean and spartan, with a lot of open space. Mum enjoys it, drawn as she is to people who are quiet and tidy, and who don’t eat between meals. For me, it’s a little sterile, although I definitely appreciate the commitment to decorating, in the form of giant baubles, and the train driving a lone, serious child around with his father. 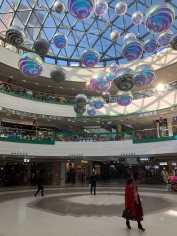 Kitty makes a beeline for Li-Ning, the sports store, to admire the basketball gear. I tell her to try the tracksuit pants on, intending to leave her with a parting gift, however, the women’s sizes are laughable and the men’s Large hits an inch or two above her ankles. If I lived here, I would have to spend the money I saved on taxis getting my clothes custom made, so it would all even out in the end.

We take advantage of said baubles by convincing Kitty to allow us to take photos of her. We are not a family that enjoys the camera. I blame Mum, since it has apparently been passed down through generations. 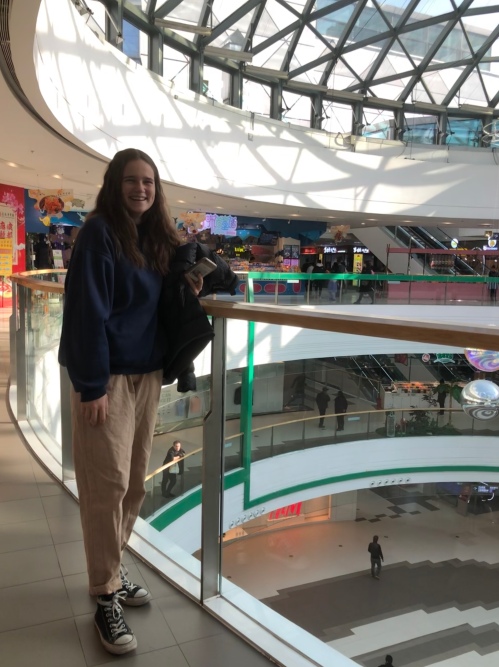 ‘Do you want to go to the coffee shop where I hang out?’ Kitty asks.

Yes, we do. We definitely, positively do.

Crossing the road isn’t easy here. Actually, correction, it isn’t easy if you are committed to having an unencumbered space on the road in order to do it. It involves moving out into an open space, allowing cars to drive behind and in front of you, using the occasional gap to progress across another lane, over and over, until you reach the other side. I have seen a computer game that involves crossing a wide highway in much the same way, except we don’t have to duck swinging construction beams as we do it. Mum clutches me for dear life every time.

Kitty’s cafe,  Famumofei, is a bright, open, cheerful space, with rows of freshly-baked goods being brought out on racks from the visible bakery space in the back.

I might like the rainbow swirl bread, and the bread rolls filled unexpectedly with strawberries and cream, but it’s evident early on that the drinks menu is where it’s at. I really want a ‘Hot full cup of grapefruit’ or a ‘Frogs bump into milk’, but can’t go past the must-try option.

My ‘Hot cheese coffee’, lukewarm, sweet and served with a fat, clear straw, is brought to us here, in the cafe’s upstairs space, which is ours alone to enjoy. Our mini cheesecakes aren’t as sweet as most, and remind me of Uncle Tetsu’s Japanese Cheesecakes in Sydney.

‘Life is either a daring adventure, or nothing at all’, reads the frame on the wall opposite. 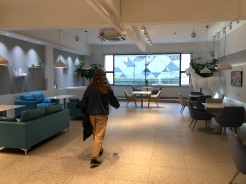 Two out of three ain’t bad:

Our taxi driver on the way home wins ‘best beeper’ by a landslide. He keeps his hand poised over the wheel, ready to slam it down for anything that moves in a metre-wide space around his vehicle. I regret not tipping him.

It’s easier to say ‘Erzhong’ (Ah-jong – the name for Jiamusi No. 2 Middle School) than ‘Xinglong Hotel’ to our taxi drivers, so we always have a short walk home after they drop us off. This time, we take photos of our favourite street by daylight. We buy our ‘Great Wall’ red wine here (it tastes like port), and Five Star Beer, which is drunk warm, and doesn’t seem to suffer for it. This is where the shop attendants ring up our purchases with singing calculators, and where we wait in line behind school students filling their noodle bowls with boiling water and pickled eggs, some of whom are brave enough to test their ‘Hello’s and ‘Bye’s on us. This is where the miniature vans and scooters gather, the latter with their quilted covers attached for warmth.

(I’ll see you a favourite street and raise you a jianbing stall.)

Can you tell who is feeling sorrowful about our imminent departure?