The Universal Language of Food 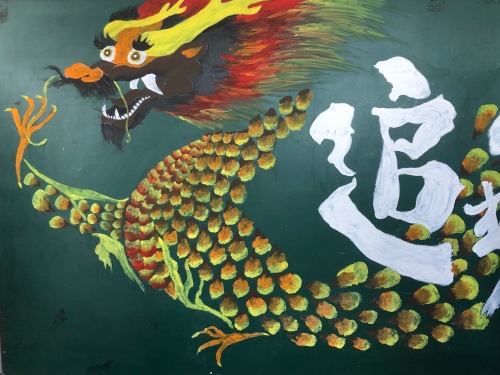 Mr Huang is a name I have heard regularly throughout Kitty’s exchange, most often when she is feeling outraged and/or resistant, developing him into a sympathetic and enduring figure in my mind.

‘Mr Huang is making me wear a dress, and it’s see through and it’s too big and I won’t!‘
‘Mr Huang says dancing is compulsory. Dancing sucks and I want to play basketball!‘
‘Mr Huang says I have to do tai chi, and I hate tai chi so much and I don’t want to do it!‘

You get the idea. Needless to say, we arrived in Jiamusi with a fairly decent gift for Mr Huang, because we figured he had done his fair share towards shaping the somewhat immutable Katherine. And, after practicing how to say fēicháng gǎnxiè (fay-chung gun-sheer, or thank you very much) over and over, we were soon ready for our 2pm meeting.

Mr Huang is is a very easy man to like. He has a sincere, friendly face and an enormous smile, and his desk is seated beneath a sky blue wall, upon which is painted, in large letters, ‘I believe I can fly, I believe I can touch this sky.’ As it turned out, he also had a gift for us, and followed up my stilted greeting by handing me a large paper bag containing something described as ‘health’ (fēicháng gǎnxiè). He then rustled through the papers on the side of his desk, pulled out a handful and placed them onto the desk before us.

He was showing us Katherine’s marks. And those of the other students on exchange, either for the purposes of comparison or because they were grouped together and easier to remove that way.

We bonded over the ‘100%’ in the corner of one sheet (that student already spoke Mandarin), by pointing to Kitty’s ‘52%’ and indicating that we liked the first one better. Laughs all around. Mr Huang then showed us around his office; inside the bookcase, through the photo album of past exchange students, at the wall of calligraphy, and into a folder on his computer, where we were treated to some footage of Katherine performing the school dance for the first time, with a look on her face that said she would rather be doing literally anything else.

We laughed heartily at her expression, and bonded over that too.

After being brought bottles of water by a student who said ‘I am. Her friend.‘ (fēicháng gǎnxiè), and accidentally thanking the wrong English teacher for being Kitty’s favourite (fēicháng gǎnxiè), we then began our walking tour of No. 2 Middle School in Jiamusi, the second-best school in the district, with Mr Huang and Miss Hu, who had joined us to assist with translation.

We entered staff rooms, where teachers stood to greet us (fēicháng gǎnxiè), walked past full classrooms, led by teachers wearing microphones, saw the school’s display of taxidermy behind glass, and met these two students in the hall, who were hard at work on a chalk-drawn blackboard display that apparently changes every month. 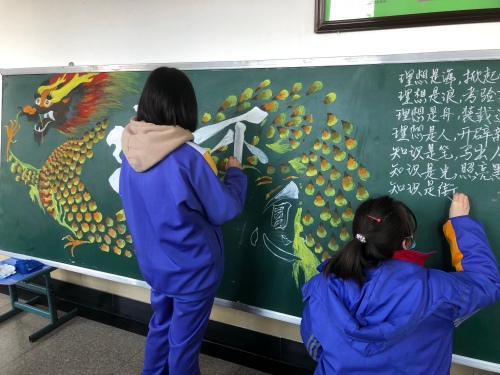 We also met the headmaster, which, according to Katherine, is considered a huge honour. Duly seated across his leather couch, Headmaster, looking very modern in his Champion all-weather vest, welcomed us to China and told us that Katherine had achieved a great many things at the school. Every now and then, he and Mr Huang would talk between themselves, and Miss Hu would say, ‘that’s headmaster talk‘, which made me smile. Finally, we all stood for photos, and handed him our gift (fēicháng gǎnxiè), before continuing our tour.

‘He said something about dinner‘, Katherine whispered in my ear. 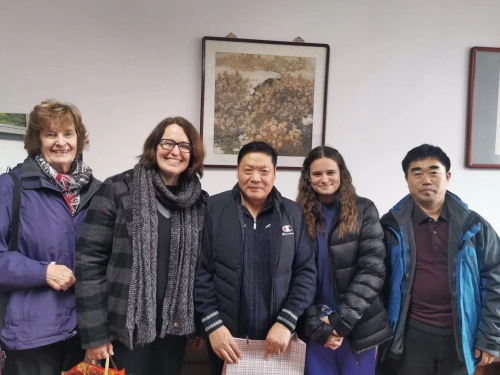 Next stop: Katherine’s favourite part of the school, the gym, where she has been given recent permission to train with the boy’s basketball team. Or, correction, where the head coach personally invited Katherine to come and train with the boy’s basketball team. (I suspect this might have occurred in response to her gazing longingly at the team from afar over an extended period of time, while staunchly resisting more feminine pursuits, but I would be guessing.)

Mum tells Mr Huang that she wishes Katherine would work as hard on her studies as she does at her basketball, which makes us all laugh some more.

She looks so small, all of a sudden. A lone girl, trying madly to keep up with the frenetic ball passes that are criss-crossing their way up and down the court. Every time Katherine is in a practice formation, I hold my breath. 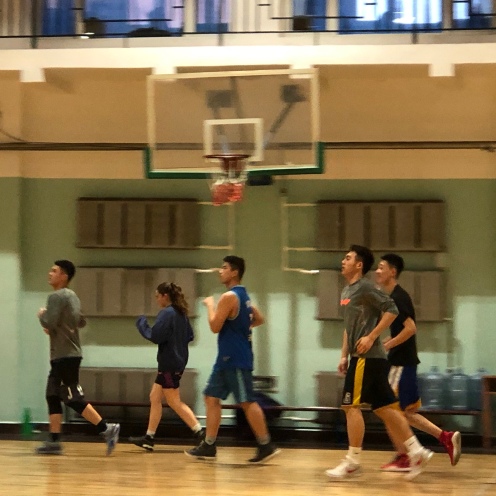 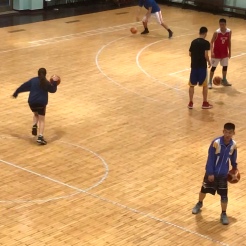 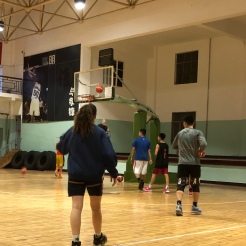 It was here, watching the team train, that we learned a little more about Mr Huang. A chemistry teacher, he attended university in Harbin and began teaching at No. 2 Middle School immediately after leaving, meaning he has been a member of staff for 26 years.

‘He was a very good teacher‘, said Miss Hu, who was in his class for chemistry. I believe her.

Mr Huang having left to take care of some ‘business’, Miss Hu then led us out of the school and into a large building around the corner from our hotel. We alighted at the second floor and were shown into a private dining room, where Bonny, ‘Sergio’ (Bonny’s host brother, Sun Ri Jian), and Mr Huang were already seated at a table that was rapidly filling with dishes.

It was a dinner I shall always remember. We ate foods that are traditional to Heliongjiang Province, pork with honey, cold noodles, and tofu in muslin, served with miniature prawns, green onions, mushrooms and crackers: 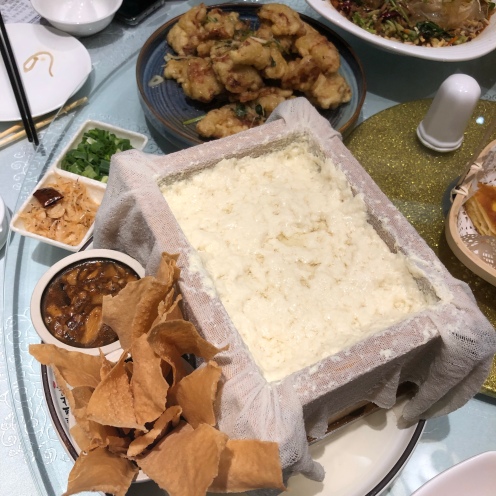 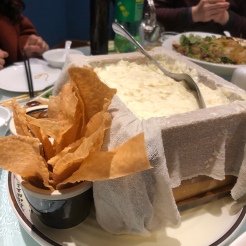 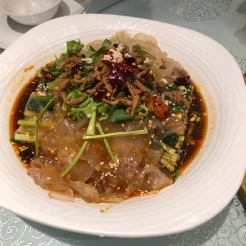 Accompanied by beef on the bone, steamed fish with enoki mushrooms, a variety of pancakes (called bing, plain, with sesame seeds and black bean paste, and with a delicious filling I couldn’t identify), and sweet potato soup: 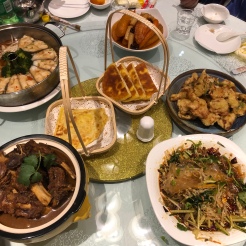 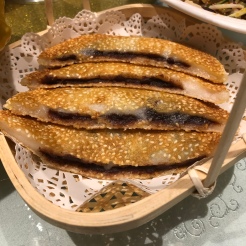 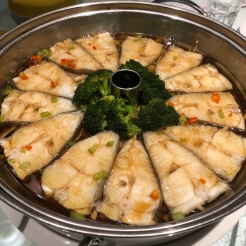 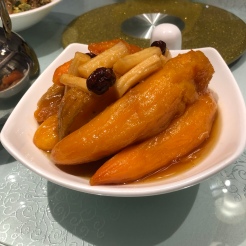 And glasses of lemonade, with which Mr Huang made many toasts. He looked at us as he spoke, clearly and patiently, and, while I didn’t know what he was actually saying (until Miss Hu’s quiet translation), I knew what he was saying.

He welcomed us to China, on behalf of the Headmaster.
He thanked us for coming to China, to see Katherine and No.2 Middle School.
And he gestured at us all and made a toast that included one of his favourite words in English, ‘happy’.

Here we all are, unprepared for a photo that, regretfully, does not include our hosts. 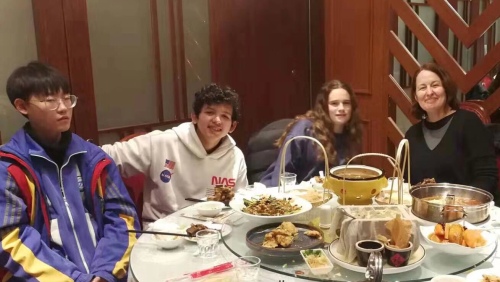 Later, after Miss Hu had left for class, and Mr Huang had escorted us right to the door of our hotel, I tried to find the words to express just how grateful I was, not only for the extraordinary generosity of the day, but for his care and guidance of Katherine, who had not settled easily into the pathway followed by many of the female students. Rather than impose on Sergio, I instead looked straight at Mr Huang, put my hand on my heart, and said,

I think he understood. 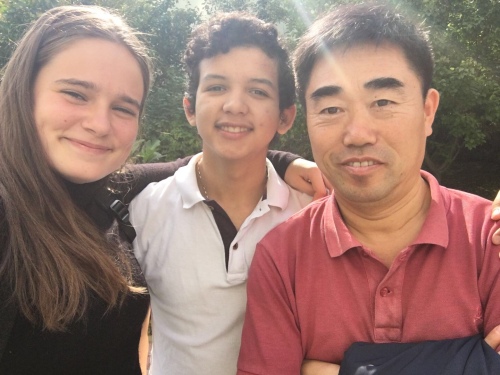