Land of Ice and Snow

Heilongjiang Province, if you aren’t a bird-watcher or a fisherman, is known for its frozen tourism, with annual attractions that have titles like ‘Ice and Snow World’, ‘Ice Lantern Fair’ and ‘Polarland’ (technically all part of the Ice and Snow Festival in Harbin, but you get the idea). This morning, we were treated to an attraction all of our own, when we awoke to find a Jiamusi turned white.

This was the view out of our hotel room window: 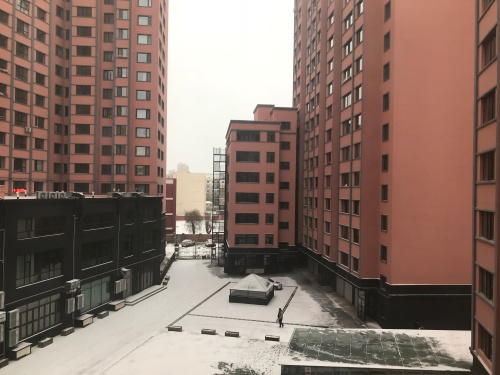 I have a thing about snow. I’ve only seen it a handful of times as an adult (twice if the qualifying measure is that it piles up onto itself, rather than dissolving immediately into nothingness), and there is something about the whole ‘no two snowflakes alike’ that fills me with wonder. I guess that’s what happens when you live in a country where winter means dragging the bar heater out of the shed for a month or two and wearing socks at night. When the only snow you ever see is atop distant, holiday mountains, it never really loses its whole winter-wonderland mystery. Or it hasn’t for me, anyway.

The veneer did suffer a minor crack a couple of years ago in New York, when I made the ground-breaking discovery that snow eventually melts, leaving things icy or wet in its wake, both of which are decidedly not wondrous. At the time, it was so disappointing, I wished I had stayed inside and left it well enough alone.

Not so this morning! I was so excited, I suggested a commemorative selfie, right outside out hotel: 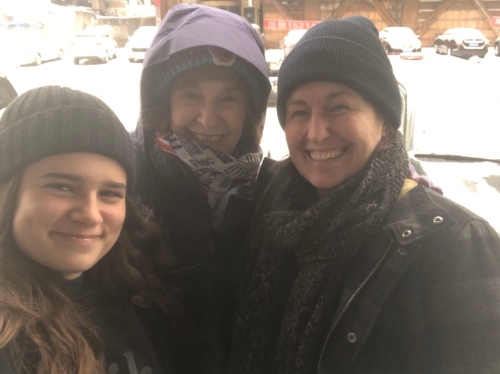 I became a little more acquainted with the snow today, this being easily the heaviest snowfall of my memory. A near slip on an icy patch had me planting each foot down flat, resulting in a kind of Pythonesque high-knee clomp that made me feel (and look, no doubt) decidedly silly. On the balance of things, it was preferable to slipping and landing on my arse, but it sure slowed our progress. Here is Katherine, on the opposite side of the road, lamenting her lot in life. Mum is clutching my arm here, and we are waiting for an opportune time to clomp our way over to her (in our defence, we now can’t even see the decorative crossings).

I also discovered that it’s handy to have an umbrella in a snowstorm. Who knew? Like rain, those snowflakes just keep coming, and the end result might come by the slow route, but, make no mistake, all paths lead to wet.

We didn’t allow this to divert us from our original plan, which was to see the Songhua River, a tributary of the Amur River, which forms the border between northeastern China and Russia’s Far East. Every year, the Songhua freezes over to a metre deep, apparently making it the winter equivalent of a ‘summer bathing beach’, teeming with visitors who are keen to skate, ice sail, and travel in horse-drawn sleighs.

Our taxi driver asked Katherine if it was the first time we had seen snow, and brought us here, to this as-yet unidentified memorial tower (China doesn’t like Google): 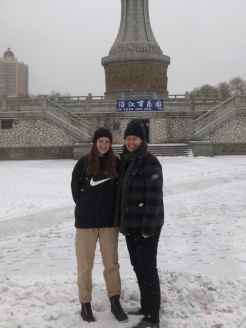 The river hasn’t yet frozen, as evidenced by the presence of this lone boat. I wonder if it’s possible to actually be on the river when it freezes? Does it happen quickly enough to get stuck, or does the water around you become slushy first? Do fish freeze in it too? Who is the first to walk out onto the ice? Is there a designated tester, before the visitors to the equivalent of a ‘summer bathing beach’ descend, en masse?

I have so many questions.

It’s so cold that every one one of these photos cost me some frozen finger pain, and mounting concern that snowflakes (aka water) are a poor match for an exposed phone. 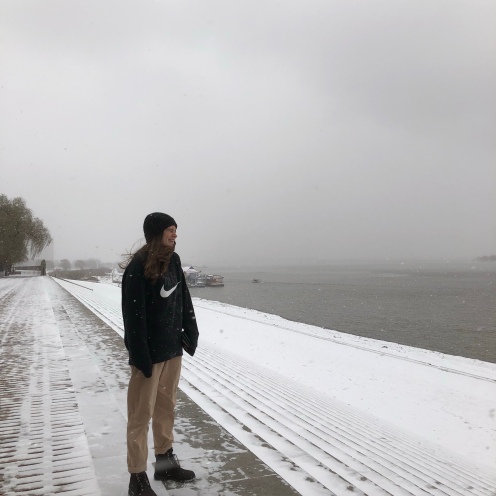 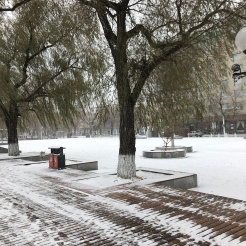 As we clutched and clomped our way to hail a taxi, squinting and wrapping scarves around our faces to stop the snowflakes flying into our eyes, I spotted a man doing tai chi beneath a tree. He isn’t easy to make out in this image, but I place it here to remind myself that there is much to learn from such a man.

We returned home to discover that the locals had been hard at work, shovelling the snow off the footpaths and down into the gutters, where great mounds grew. On their breaks, the school students we can see from our window pour out and get to work, clearing their outdoor area, so it is ready for physical activity later in the day. It surprised me, but I’m not sure why; I guess not everyone has the luxury of staying inside when the weather makes life difficult.

I know I didn’t. Mum refused to leave our room again for fear of slipping on the ice, which meant putting me in charge of soup, banking and cigarette testing (who else is going to make sure they are the right ones for gifts?). My outings furthered my education in snow, teaching me that outdoor fish markets can just stay put: 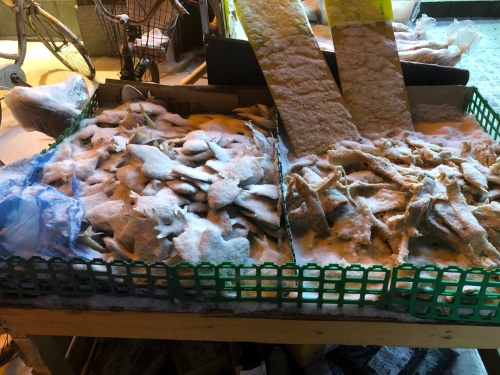 That it will take more than a little snow to keep the students from their hot pots: 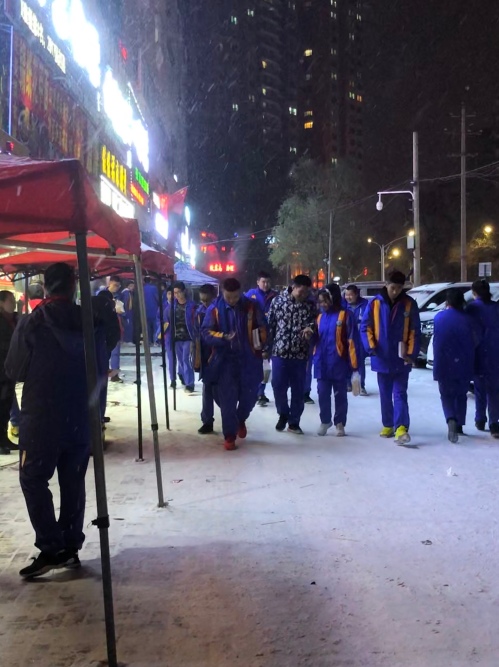 And, alas, that I have eaten my last, most-favourite, jianbing. 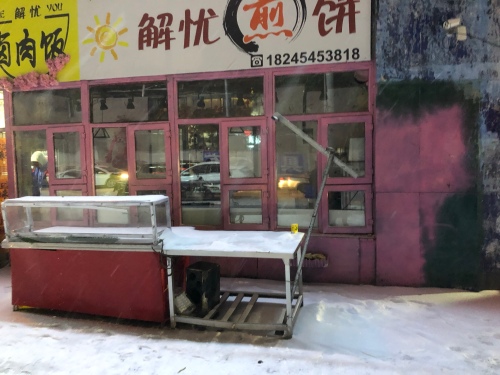 2 Comments to “Land of Ice and Snow”