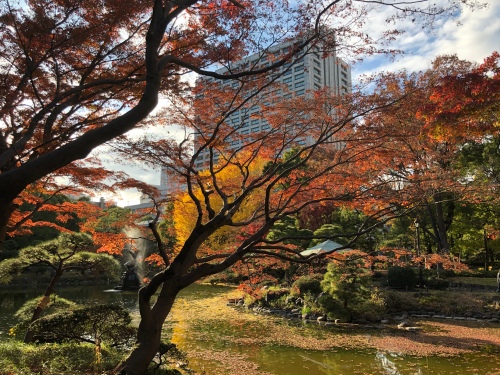 Japan loves its bikes. It was one of the first things I noticed in Osaka – the numbers of bikes not only being ridden, but gathered at the doors of supermarkets and apartment blocks, and parked en masse in parking bays. So, when I woke up on the day of our Tokyo Great Cycling Tour, I was excited to participate in an activity that is apparently held dear.

Mary was less excited, so I may have held back the tour length information (six hours), figuring she would love it so much while cycling (huge reviews on TripAdvisor), it wouldn’t matter.

We arrived to find another Australian tourist in a discussion with two guides about his tour, whereby we were given an option between the one we had picked (Route C: 26km, some hills) and an alternative tour running that day (Route G: 29km, with more hills, which I assumed he was doing). I tried to make it look like there was a decision to be made, by looking back and forth between the maps and hmmm-ing.

Duly separated into two groups, Kuzo introduced himself as our tour guide. And, while I don’t want to make a big deal of Kuzo’s age, I did wonder how old he was, because, if I had to guess, I would have to say he was at least sixty. Perhaps that’s why I was lulled into such a false sense of security.

Here are our bikes, ready to go. They were still just bikes when I took this, rather than instruments of torture.

‘Have you ridden before?’ Kuzo shouted back to us.

‘We used to’, I replied, failing to add that the last time I consistently rode a bike was in the 80s.

But it was fun. After a couple of small hiccups in the navigation and getting-to-know-the-brakes departments, we rode over a bridge where we stopped to see Tokyo tower in the distance:

Then to a small shrine… 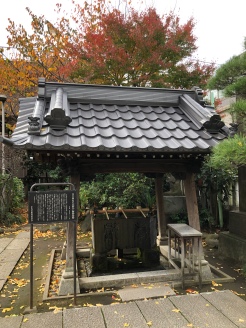 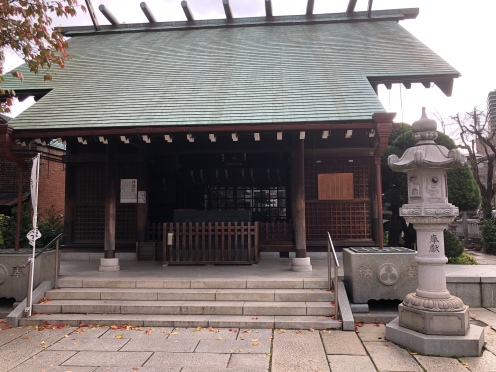 …where we learned how to wash our hands, and bought daruma dolls. Mary and I both wanted a red doll (signifying study), but there was only one left, so I took a blue one (skills). My fortune was excellent, making me wonder what I’m about to get good at (feeding a family on $20 a week, most likely), but Mary’s was ‘so so’, so Kuzo helped her tie it to the not-so-great fortune line (apparently you leave the bad ones behind). 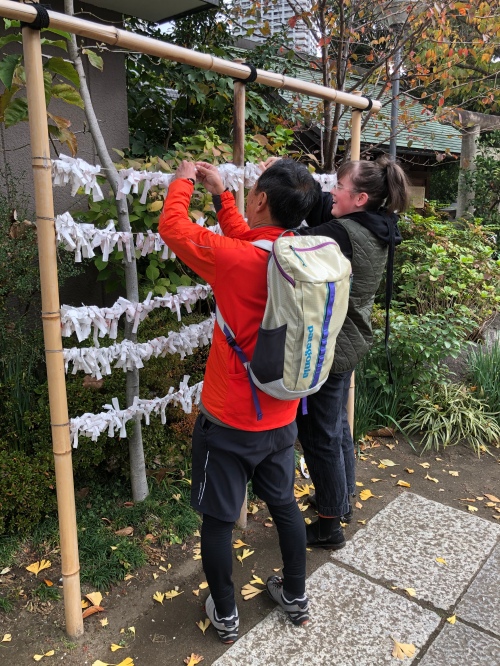 Next stop: the outdoor food market, added to the tour in place of the fish market, which had recently moved. Mary and I wanted to come back here, to eat at one of the standing sushi bars, and to try uni, which was the sole item for sale at one stall we saw. It was also the first time we had noticed squid jerky, since dipping it in mayo at the Tsugawas, so we were keen to add that to the list as well.

From there, we rode to one of my favourite stops of the tour, a traditional Japanese sweet shop, where we chose sweets to have later, after our lunch. The sweet shop lady was gracious, allowing us to try at least as much as Kuzo eventually bought, and bringing us small cups of green tea. I had planned on buying sweets as gifts, but soon realised they aren’t the travelling kind. 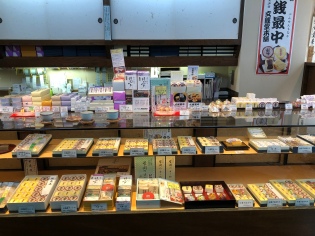 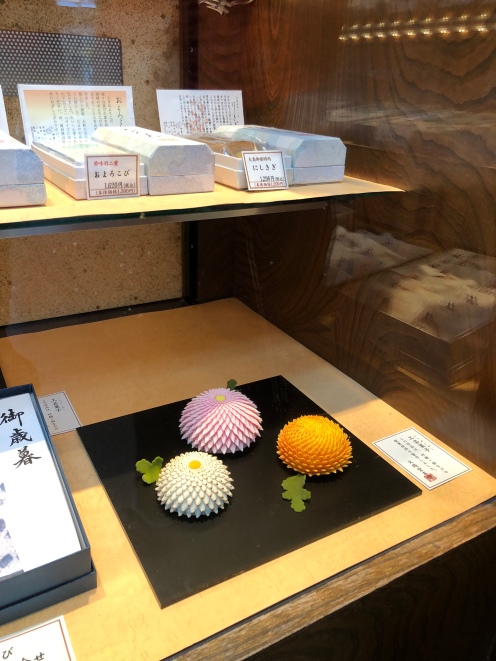 It’s important to add here, with all this looming doom and gloom, that I was absolutely loving this, right about now. I couldn’t wipe the smile off my face, as we rode through the high-end stores of Ginza and past the Oyster Shack of Shimbashi (remembered because I wanted to go back there), zipping up onto the footpaths and back onto the roads, sans helmet or a care in the world.

When we pulled up at the lights before our next stop, Zojoji Temple, a couple of tourists asked where we had cycled from, and I answered, ‘Kayabacho’, with the emphasis on the ‘cho’ (as it should be), making me feel clever and athletic, all at once, in a don’t-you-wish-you-were-doing-this-activity kind of way.

Zojoji Temple was lovely. Kuzo took us inside, where we sat silently for a moment. ‘As you can see’, he whispered with a smile, ‘this is a very good place for meditation…or a nap’. 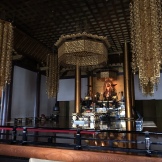 Until this point, the stops had been pretty close together, and the walking interspersed with the riding had smoothed things out, so I was feeling good about how the tour was going. Except, at this stage, Kuzo notified us that the next section was, ‘a bit longer…about 25 minutes…with some hills’. And that’s pretty much where things started to, if not plummet, get somewhat difficult.

We passed through Aoyama Cemetery, where Kuzo stopped (oh-so-desperately-briefly) to explain that everyone is cremated in Japan, and that his ashes would one day join those of his parents in their grave. I didn’t feel good about taking a photo here, so abstained, but I do remember feeling despondent that we hadn’t stopped for a walk.

And we passed Sunny Hills Cake Shop, the wooden building designed by Kengo Kumo, who designed the stadium for the 2020 Olympics, which is currently under construction.

When we arrived at our lunch stop, Yoyogi Park, my bum was so sore, I couldn’t even fathom what it might have felt like if my seat didn’t have a ‘padded seat cover’ (I put that term in quotation marks because it was that by name only), and I was ravenously hungry. When Kuzo asked if the food was ok, I remember thinking that it was the best thing I had ever eaten in my life. Here are my chicken and vegetables and rice (after a transport-by-bicycle slide), and my chosen sweet, adzuki bean paste wrapped in something that tasted like a cross between pastry and fortune cookies. Sublime. 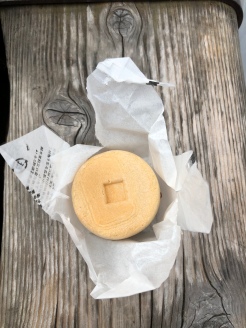 Yoyogi Park is stunning, and the local crows certainly agree. There are hordes of them, washing themselves in the water, crowding the trees, filling the air with their huge variety of calls…and staring down the visitors with food. 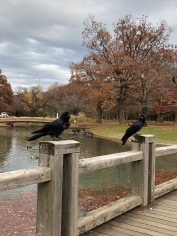 We finished lunch. And getting back on that bike, after the bliss of food and rest, was one of the hardest things I’ve ever had to do. Mary told me later that it was about now that a single tear rolled down one of her cheeks, and she had to brush it away so Kuzo wouldn’t notice. And it was about now that I wondered why the hell I thought I could ride 26km across Tokyo, on a tour that actually stated ‘Participants should be experienced in cycling and / or be physically fit’.

But, the show goes on. I am nothing if not stoic, and there was no way I was letting down our kind, gracious, patient host, Kuzo, who was apparently born on a bike.

Meiji Shrine gave us some respite, as it included a 45-minute walking tour. The shrine is dedicated to the late Emperor Meiji, whose grave is in Kyoto. The surrounding forest, made up of 120,000 trees of 365 different species, is entirely man-made, from donations by people across Japan. It’s beautiful. 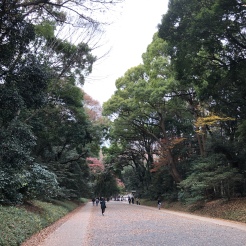 With Meiji Shrine being built because Emperor Meiji was held in such high regard, I asked Kuzo if there had been emperors that the people did not like so much. ‘Only communists’, he replied, misunderstanding me.

There are kazarikaru (sake barrels) near the entrance of the shrine, with wine barrels on the opposite side, apparently because the emperor also enjoyed wine.

Here we are, grateful to be on our feet.

Inside the square in front of the shrine, visitors were writing their wishes down and hanging them on this wall. I enjoyed reading the ones in English, although a couple were heart-wrenchingly sad. 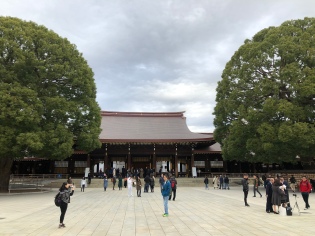 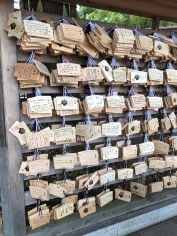 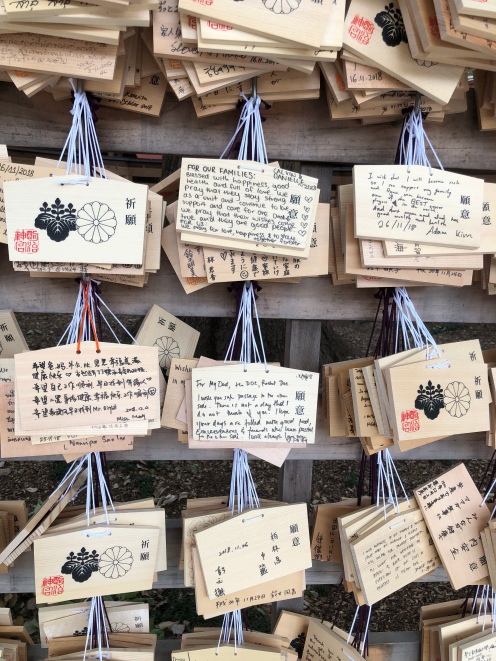 During the next session of riding, I began to employ a whole range of tactics to try and reduce the pressure on my bum; leaning forward (difficult to steer); riding very quickly, then gliding with one leg straightened, holding me off the seat; sitting on one cheek, then the other; sliding right off the seat at every red light; brief moments of standing. Oh, the pain! At one point, it honestly felt like I had been impaled on the pole that held that damned seat.

But, I think I eventually accepted that pain was my new reality, and resigned myself to having to feel it, and that, combined with being on the downhill run (not literally downhill, mind you) things started to seem possible again. We saw the house for visiting dignitaries, looking imposing under a cloudy sky: 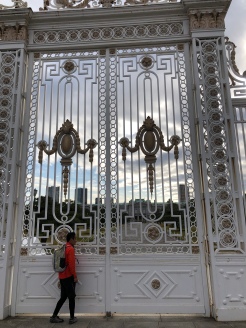 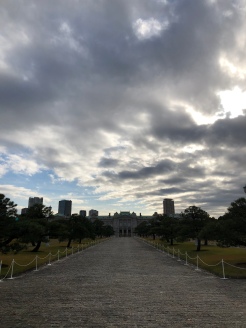 And Parliament House, accosted by school children, showing us that some things are the same across cultures:

And we eventually found ourselves at the Imperial Palace, which had huge queues due to a part of the palace being unexpectedly open to the public. Kuzo remarked at how warm the day was, which led to us discussing the recent heatwaves in Tokyo.

‘It was so hot one day’, he told me, ‘that when I was playing tennis, I thought I might die!’

‘Kuzo’, I replied, ‘you know that you could always not play tennis, don’t you?’

Then we rode around the perimeter of the site for the 2020 Tokyo Olympics, and to this beautiful park, to make up for the tour still having some time left. I wanted to let him know that we were more than happy with our 5.5 hours, but also wasn’t sure how to keep the despair out of my voice, so I just got on with it. I now believe it was worth it.

During the last section of our tour, I think Mary and I gained a sort of second wind, like the marathon runners do a few metres from the finish line, helped along by Kuzo’s declaration that we had cycled our last hill. Although the pedestrian activity towards the end grew thicker, and I was concerned on occasion that my ability to duck around them may be impaired by sheer exhaustion.

Later, in the bike shop, as Kuzo made us coffee, I pointed to the dining chairs made out of bike seats and asked Mary if she wanted to sit there for our coffees, and we laughed harder than we should have.

Kuzo took this picture of us towards the tail end of our tour, in front of the moat at the Imperial Palace, when we were too tired to resist. I place it here to remind myself that on this day, I soldiered on, and cycled up every hill, not stopping to walk once.

And if I can do that, I can pretty much do anything. 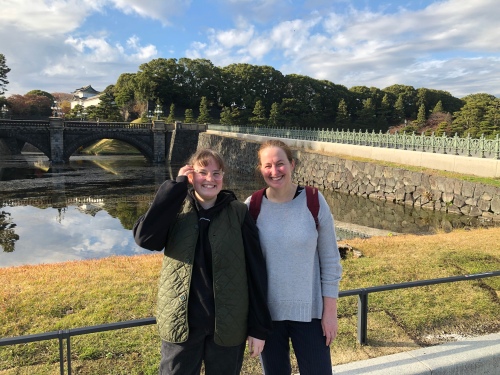