On our last full day in Tokyo, we were booked into our last long-planned activity, lunch at Kyubey in Ginza. And it had taken some investigation to land on Kyubey. I knew I wanted to eat at a good sushi restaurant, but there were a whole heap of factors in play when it came to selecting one.

I likely wouldn’t have been able to snag a seat at the obvious standout, Sukiyabashi Jiro (although I would have tried my darndest), but it ended up coming off the list because it made me so profoundly nervous. My sushi experience is limited to the 4pm half-price specials around the corner from work, and my chopstick skills are fortunate to be called ‘skills’, so I knew there would be little chance I could ‘place [my] chopsticks parallel to the tray as if they are the shrine’s carrying poles, and lift up the sushi by grasping it along its sides’. Read the rules. Nervous fingers spill sushi topping. I would have been doomed.

Enter: Ginza Kyubey. Founded in 1935 by Hisaji Imada, Kyubey is sans Michelin stars, but is 13th on La Liste’s top restaurants in the world, and seemed to pop up time and time again in my sushi searches. I loved that it is still run by Imada’s son, Yosuke (who, at 73, says, ‘I made sushi yesterday – and I know that today’s sushi will be better than yesterday’s’), and that the gunkanmaki, or warship roll, was literally invented there after WWII. Most importantly, however, I loved that they are renowned for being nice to foreigners.

What really sealed the deal though, was that Kyubey was Mary’s choice too (what are the odds?), after she saw it on the sushi edition of Buzzfeed’s ‘Worth It’, where they try similar foods at three restaurants with different price points (in this case, from conveyor belt sushi made by a robot through to…well, Kyubey) and reflect on whether or not they are ‘worth it’. (Clue: it was).

Anyway, enough of the obsessive planning stage. We found ourselves here, nice and early (they only take lunch bookings for 11.30am), more nervous than excited, seriously questioning finances, and hungry. 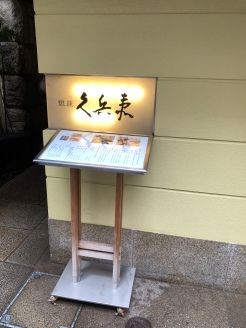 We were welcomed early, and escorted to the 12-seat chef’s counter on the fifth floor, where the interior reminded me of our ryokan in Kyoto, all clean lines and pale wood. The counter was full, and we were the only Western diners there. We ordered the ‘Kyubey’ omasake (16 courses of chef’s selection), and Perrier, because I wasn’t sure if sake was de rigueur in the morning.

Our sushi chef was marvellous. He asked where we were from, and looked pleased that we had ordered the signature omasake, although that may be because the four diners beside us had too, meaning he could prepare the courses for all of us together.

And so it began…

…the pure poetry in motion of watching this man making sushi.

It didn’t taste like any sushi I have ever eaten before. I know I’m not the most discerning diner, for various reasons. I enjoy food, so I tend to eat it quickly, and I also think my brain is often somewhere else (or several places), so I’m not actually paying attention a lot of the time. But, here, the things that set this sushi apart from lesser-quality versions are like subtlety magnified – the hint of wasabi, the warmth of the rice, the brush of zest, the dab of garlic – and I felt as though I could taste them all, and the delicate perfection of how they had come together. It was wonderful. 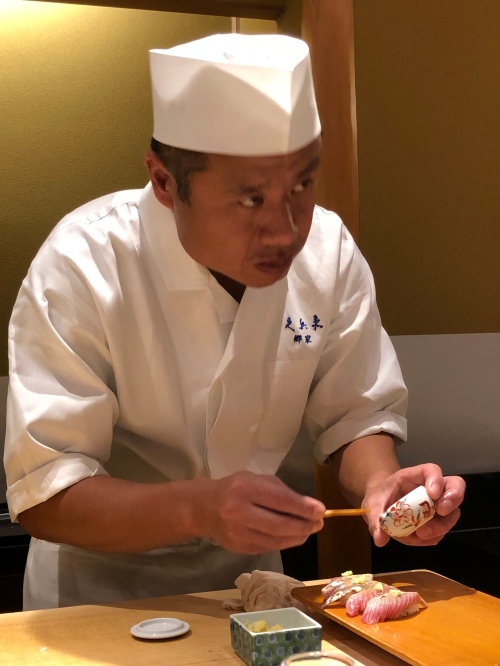 When I noticed the group beside us were drinking sake, I asked our chef to recommend some, and he nodded and shouted (quite a bit of shouting goes on in here). And the sake was the same. It was as though I had been drinking the instant coffee version of sake until now, and someone had finally brought me an espresso (ok, a latte, not-connoisseur is pretty much my standard), and every sip was a new experience.

At one stage, our chef put six live shrimp on a plate and smiled at us, knowing full well the points of greatest impact. 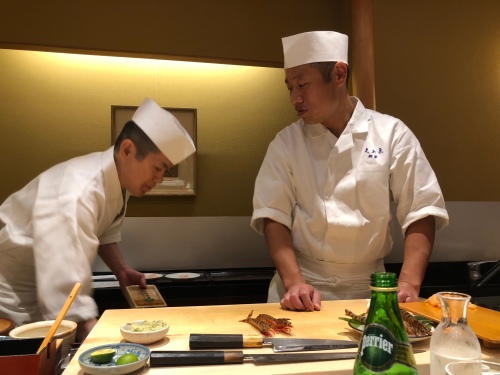 ‘Whatever you recommend‘, I answered, and was met with a smile.

He proceeded to pull the heads, cut the tails, slice and assemble, and place a still-twitching nigiri before us. It was honestly one of the best pieces of the day, all about texture and crunch. Later, he served us the crunchy, cooked head and tails, which were equally exquisite.

But there were so many standouts. Our chef would place a piece down in front of us, pause, and say, ‘Bonito‘ or ‘Tuna Cheek‘, and I swear the flesh would move, oh-so-slightly, as it gave and rested fully upon the rice.

Occasionally, he would raise his eyebrows towards me after I had eaten it, in a how-was-that? fashion, to which I would respond with my best ‘you are a genius’ expression, and he would nod with quiet satisfaction. Even the communication was a lesson in subtlety.

And, a few pieces in, I started to cry.

Not loudly, and not so that anyone would notice, but it was definitely touch and go for a while, and it simmered below the surface for the remainder of the meal. I think it was a combination of a few things. I was relieved that we were welcomed and cared for, and had probably been quietly (very) concerned that this wouldn’t be the case. And I also felt a bit overwhelmed when I realised that I had become someone that could be here. That I could actually choose to order the signature omakase and ask for a sake recommendation at a top sushi restaurant in Tokyo and just be here, having this experience.

And then there was the more elusive factor. The one that made me think, at certain points throughout the meal, ‘This is it. This is what it’s all about.‘ I don’t know what ‘it’ was exactly. Perhaps it was the combination of tradition and culture and skill that was concentrated into every unassuming piece of sushi that was placed in front of me. Or perhaps it was just the sake before noon.

I do know that it was one of the best experiences of my life.

We ate the uni gunkanmaki, within the very walls where it had been created.

And the sandwich of perfection; shiso leaves, sesame seeds and pickled plum, between two crunchy, fresh slices of daikon radish.

And hosomake, not like any I have eaten at 4.15pm on I-forgot-my-lunch work days.

And the bittersweet finale, dessert, in the form of two tiny pieces of egg and rice, and a worthy challenger to the tea jelly of Kyoto.

The elevator opened on the ground floor to Yosuke Imada, friendly and gracious, and waiting to farewell us at the door. And when we hit the street, I remember saying to Mary, ‘what do we do now?‘, and meaning it in a far-more-dramatic fashion than simply ‘where are we going?’.

What do we do indeed.

A blog post with excellent pictures from a meal very similar to ours can be found here.

And, if you have time, read this article from 1971 about Yosuke Imada, from The New York Times archives. It’s terrific.