“What would you see if you were only here for 24 hours?‘ I asked.
‘Ah’d get pissed!‘ he replied, ‘Ah’d come home covered in sick, with a donor kebab in my hand.‘

He drove me through Old Town, making jokes about having to watch his wallet, because Australians are all descended from convicts (‘yep, your dross‘, I added). I was enthralled with my first impressions of the city, leading him to add wistfully, before departing,

‘Ah’m jealous of ye…ah’ve seen it all before.‘

Later, I went down to retrace our drive, (with Maison de Moggie, the cat cafe, as my landmark), so I could remember my first glimpses of Edinburgh Castle, in the narrow spaces between the buildings. It’s quite a thing. 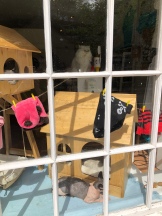 My Airbnb was along a cobbled path, and came with castle-spiral stairs and history notes. And, after buying cheese and wine from Sainsbury’s and discovering Jeremy Kyle on television, I might have bunkered down for the night, but for the your-time-is-short thoughts that niggled me. 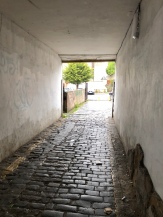 I made a decision. I was going to free ball it (Scottish style!). No research, no planning, and, most importantly, no regrets, even if I ended up walking from within a whisker of the most-significant landmark in Edinburgh (an easy challenge when the castle is so hard to miss).

I released the cheese…and went walking.

The history of Edinburgh oozes from its streets. Or, should I say, its Lanes and Rows (‘Potter Row’, anyone?), and especially its Closes, the alleyways that branch off the main street of Old Town, the Royal Mile. 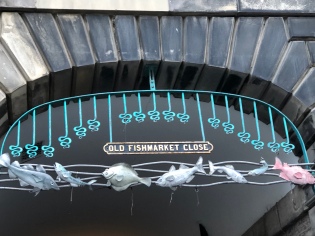 I would have liked to explore them all (no regrets), but particularly Real Mary King’s Close, which is located beneath the buildings of the Royal Mile, and about which myths and legends abound. I soon discovered, however, that underground Edinburgh is accessible only by tour guide, and I wasn’t in the mood for what I suspected would involve capes and a barrage of ‘mwahahahas’.

Or perhaps I’m getting mixed up with the caped ‘Harry Potter’ guides, which are dotted throughout the city, even at night. I think it’s fair to say that Edinburgh is in the not-insubstantial grip of Harry Potter fever, with many of the businesses declaring their links to JK Rowling’s creation. One eatery sign read, ‘Parts of Harry Potter may have been written here.‘ 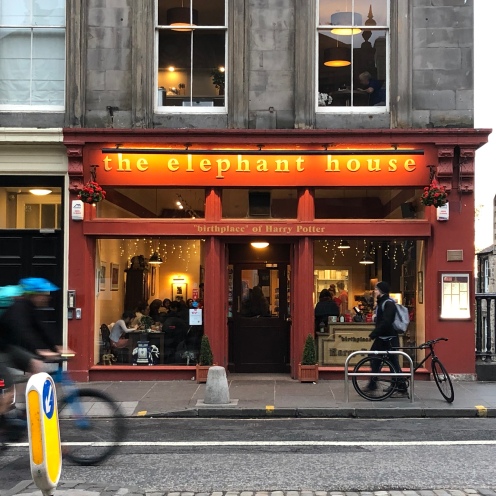 To be fair, this part of Edinburgh looks like one big Diagon Alley, Harry Potter’s mythical, cobblestoned, shopping street for wizards. It has more than its fair share of stores that have ‘Curios’ in their names, set amongst the cashmere and tartan. I loved the unexpected, like Avizandum, the Scottish law bookshop, situated on Candlemaker Row. You couldn’t make this stuff up if you tried. 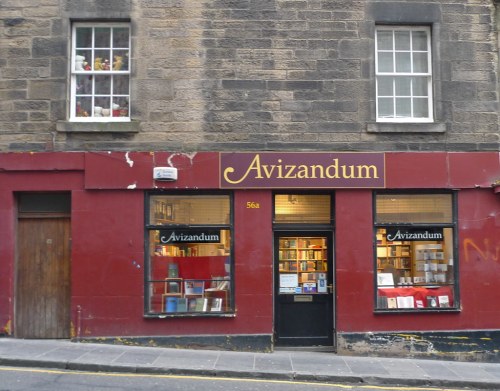 Edinburgh castle is atmospheric by sunset. I was inordinately thrilled by the placement of this iconic black taxi on its esplanade… 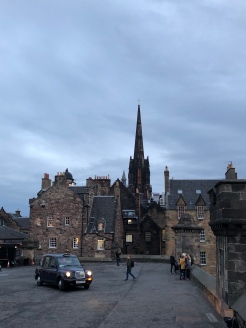 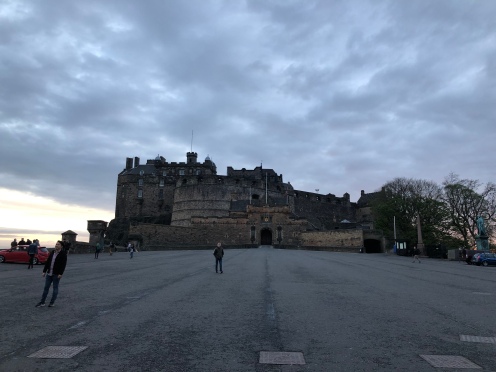 …and by the fact that every business, from hotels to cafes to cheap Scottish souvenirs, is housed in a building that is hundreds of years old. Bedlam Theatre, for example, lives in a former Neogothic church, and is the oldest student-run theatre company in Britain.

I wandered without checking a map for a couple of hours, snapping shots of what I felt was quintessential Edinburgh, including a favourite of spired buildings by sunset. 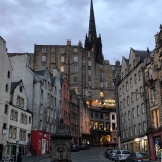 The following morning, my mum sent me a message that included, ‘I would probably skip the castle’. I won’t tell my dad about this, because they are just short of fifty years of marriage, and I don’t want to put a spanner in the works.

Edinburgh Castle’s position on the edge of a rock isn’t unique, but its placement, smack-bang in the middle of the city, may well be. And if the age of Edinburgh’s buildings gives food for thought, looking up and seeing an imposing castle on the skyline is a veritable feast. Not as yet impressed (soooo many castles)? This one sits upon an extinct volcano. For real. 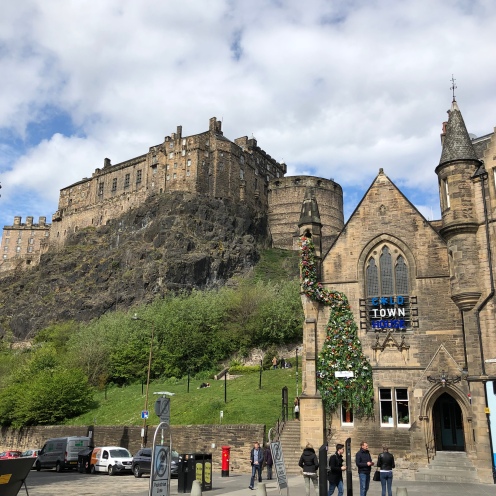 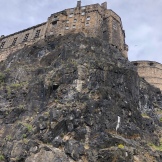 Consequently, it is busy on a whole other level. Walking through some sections involves (willingly) entering a crush, and moving along with the tide, and there are queues to see pretty much everything. Tour guides do great business here, these kilted Pied Pipers of Edinburgh, hamming it up, Scots style, with their trails of tourists behind them. My favourite wasn’t having any of it; when I came across him, he was telling his crew, in no uncertain terms, that the war memorial was sacred, and that everyone should show some respect whilst inside. I took it on board, and put my phone away.

I missed the Scottish Crown Jewels (my queue-tolerance has limitations), but braved the swarm of schoolchildren for the National War Museum. Even amidst kids playing sword games, the museum is, as expected, a sombre place to be, so I enjoyed the occasional relief, in the form of posters…and hot Scotsmen (I have a recently-enforced predilection for the beard/kilt combo). 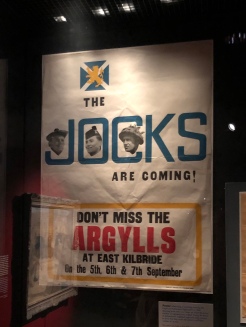 I saw St Margaret’s Chapel, Edinburgh’s oldest of the old, Mons Meg, the castle’s monumental, 17th-Century cannon, and the (now-familiar) hammerbeam roof of The Great Hall… 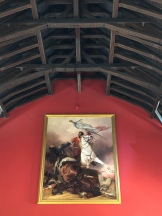 …along with the more-unusual offerings, such as the ‘Cemetery for Military Dogs’ and ‘Prisoner’s Latrines’ (yes, really). 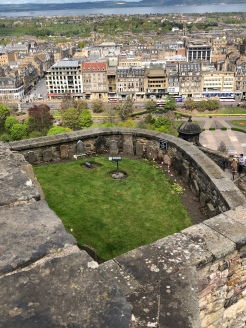 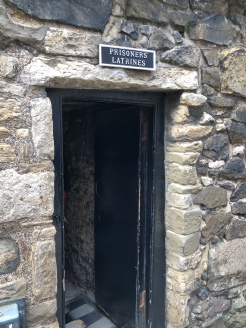 The Castle completed, I made a beeline for one of my favourite tourist traps, namely the hop-on, hop-off red bus, of which a version seems to appear in cities all around the world. Sitting in the open air on the top level gave me a perfect vantage point to conclude the following: 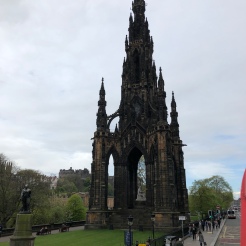 I also discovered that, wherever you go, groups of people will walk four abreast on the footpath, blocking it entirely and, where there is an accessible rooftop, however stately the building, there will be a resident having a quiet fag. 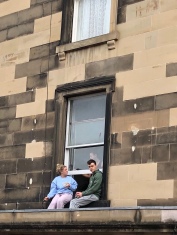 And I tallied some favourites; human statues, a kilt in a Close, the locks of love, redhead pride, my future wardrobe… 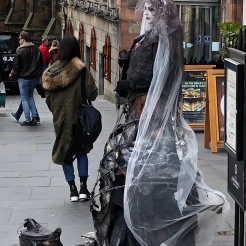 …and piping buskers, for the win!

Finally, as an acknowledgment to the references to the produce-driven food scene that I have consistently managed to miss, I sat down for my last hurrah; an elegant lunch at Wedgwood (budget be damned!), where I ate haddock croquettes, foraged hogweed, and parfait with rhubarb (three ways), served by this skilled, mysterious, set of hands. 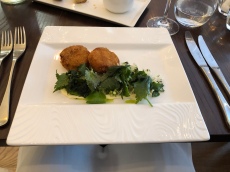 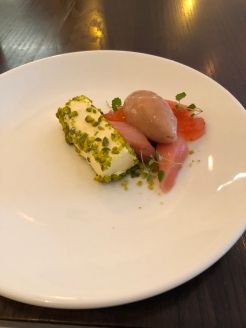 A solo meal was the perfect conclusion to this trip, because it has been something of an experiment in being alone. And, although I reflected on that fact often, it was usually only because I remembered I ought to have an opinion about it, and not because it independently amounted to anything. Does that make sense?

Being away with my daughters taught me things about them that I may not otherwise have learned, and being away with myself was, likewise, illuminating. I learned that coffee and wine need not bookend my day, and that I write best in the dark hours of morning. That nature is magnificent and can be a destination in itself, and that history, particularly when you feel invested in it, is eternally thrilling.

More importantly, I learned that everything need not be controlled, and that venturing beyond comfort zones is important, and that family, being the people who support you, and take pleasure in you, and raise you up, are everything.

Finally, I learned that I love Scotland.

Farewell, ye auld beauty. I will see you soon.