Because of my decision to pop back down and see Uncle Jimmy on my way to Edinburgh (note: not on the way), Dundee became little more than a stopover. It seems really unfair to relegate a city to stopover status…to arrive late and tired, and leave as soon as you open your eyes. So, I at least went for a late night walk, both to honour Dundee, and because there was no chance I was missing seeing Kengo Kuma’s V&A Museum.

Dundee is lovely. It is a big enough city to have an enormous statue of Robbie Burns, and an art gallery housed in an old gothic revival-style building in the centre of town (Scotland’s cities are stately).

But here is the new jewel in the crown. It’s remarkable.

And a reminder of the Kuma building Mary and I saw in Tokyo:

And then it was off to Uncle Jimmy’s.

It’s amazing how quickly you can incorporate yourself into the life of an area, or, in fact, into a new life, as I managed to do with ‘The South’. For me, I think it was the combination of a few things. The initial impact of driving down from Edinburgh on that first day, taking everything in, my eyes peeled for contrast…then having long enough to settle in. And feeling very at home with Jimmy, which did away with any awkwardness, and had me participating in the day-to-day tasks of life – paying poll tax, taking rubbish out, buying tomato plants.

But most significant, I think, was the tight routine I held whilst at Waterbeck. The pattern was the same every day. Wake up, make coffee, write, head to Jimmy’s. Get home just before sundown and read a book before bed. I’m going to try to keep that one when I get home.

The point is, it felt like I was driving home. And, obviously, Jimmy was pretty relaxed about the idea of my coming too, because when I arrived, he had gone out for coffee. 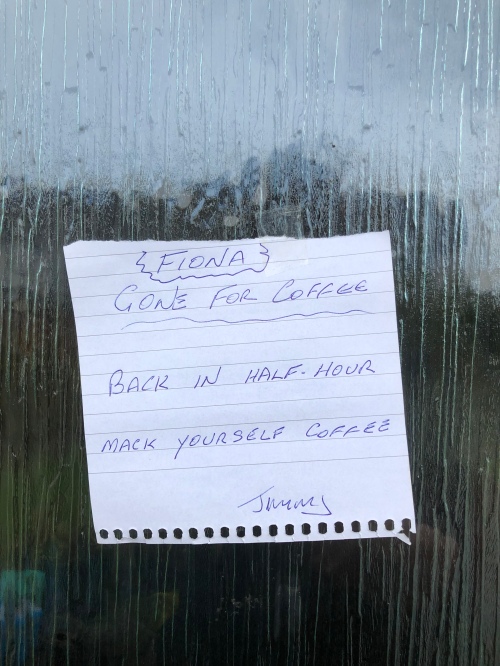 After, we drove into town to wash the red car and set up Jimmy’s new phone. He struggled to walk up the hill to the shopping centre, and had to stop for a break.

Boy, do we laugh.

Later, after a brief iPhone lesson, where Jimmy managed to start Siri about 25 times, we had dinner (this doesn’t include dessert – strawberries with carnation milk). And, as I was sorting my blow-up camping mattress (which took him a day to inflate, after the pump wouldn’t work), I detected the first touch of awkwardness, when, on his way to bed, Jimmy assured me he would not come out of his room until 8am.

‘Come out anytime. I promise I won’t be naked.”

I told you. We really laugh.

When asked in passing at one point on this holiday if I had tasted haggis, it occurred to me that I hadn’t just tasted haggis. I had eaten it as part of a household breakfast, with the dried part of the end sliced off and discarded before the cutting of the new ones. And I had eaten it on my knee with the telly on.

The next morning was no different.

‘Do you like kippers?‘, Jimmy asked.
‘No idea, never eaten them‘, I replied (but probably yes, let’s face it).

I do, it turns out. These ones were poached in water. And were accompanied by stories about the ones that come with heads intact, and the huge versions (in comparison to these) which are also gutted and splayed, like so.

And I ate them on my knee with the telly on.

We drove down together to see where Granny’s ashes had been spread, down on the Solway. Jimmy’s father had also had his spread there first, and he had me in stitches as he described John sinking into his knees in the bog and shouting, ‘the auld c*nt’s trying to take me with him!‘

Jimmy seemed almost apologetic for the gloominess of the Solway, but I didn’t find it gloomy at all. I thought it was beautiful, and I said a quiet hello, and goodbye, to Granny while I was there. 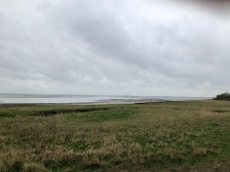 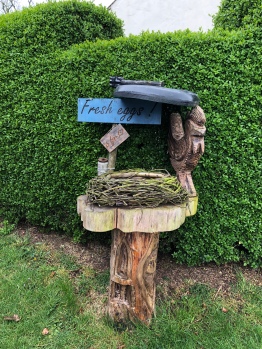 Then we went for coffee, where I took this final, soon-to-be-framed pic of Jimmy, removing his froth. 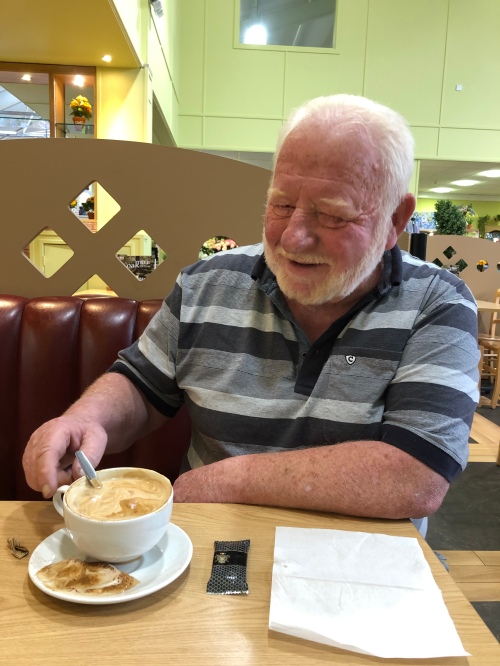 After replacing the money Jimmy kept trying to stuff into my hands, I took the enormous bag of car snacks, gave him a hug, and set off for the last time.

And I cried all the way to Edinburgh.