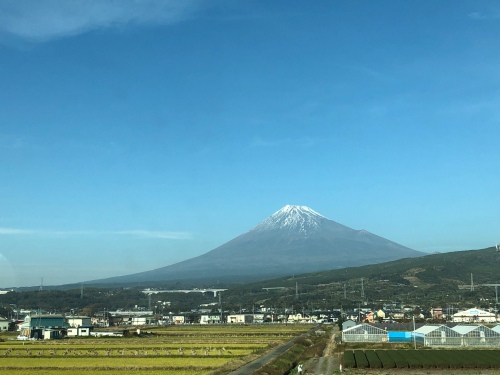 Tokyo is something else altogether.

First thoughts? The people are stylish. It’s particularly noticeable in the men, who wear scarves and waistcoats and cool socks, and carry bags or wear satchels slung over their chests. And the street style is out of this world. I’ve seen a large proportion of the coolest-looking people I have ever seen in my life during the past 48 hours. These photos are the least of it (LOVED the twins) – I would have done anything to get one of the guy with the mohawk, wearing black knickerbockers and red clogs, or the woman in the cape and cossack hat.

Mary nailed it when she said, ‘so many of the people here are unintentionally stylish’. If I had to try and explain it, there is a real feeling of commitment to personal presentation and to the effort it takes to achieve it, but not necessarily to the ultimate effect. Does that make sense? It really makes me want to try harder. I may put my grey jumper in the ‘combustibles’ bin…burning seems appropriate.

And there are SO MANY PEOPLE. All of a sudden, Sydney seems adorable for calling itself a major city. Greater Tokyo, which is similar to Sydney in terms of land area, has a population of over 38 million people. Shinjuku Station, where we met our guide for a free walking tour of the area, has 780,000 people travel through it every day. According to this article, all but 6 of the top 51 busiest train stations in the world are in Japan. Despite this, everything is pretty orderly. 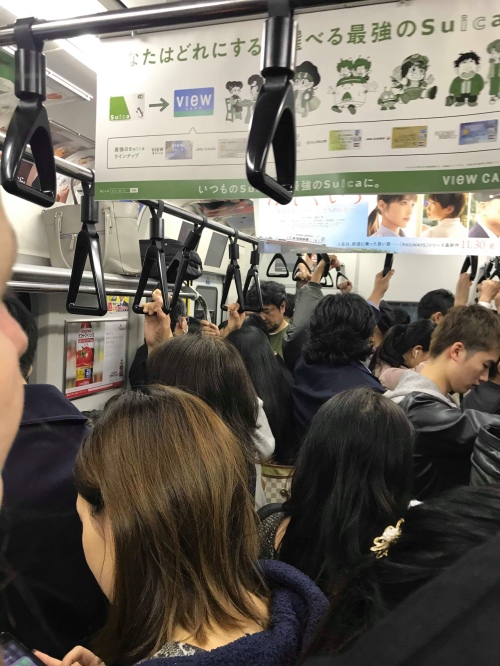 Our walking tour was great. Dai didn’t just show us the sights, he also told us something of how things work on a social level in Tokyo. We learned about Gokon (group dating) parties, and salarymen and business culture, and love hotels. And how important it is to decide how big a night you will have at 11pm, otherwise you will miss your train, and have to party until dawn. Later, I enjoyed pretending there was an actual decision to be made. 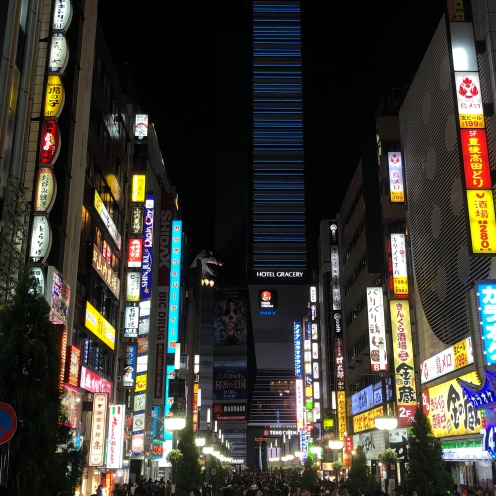 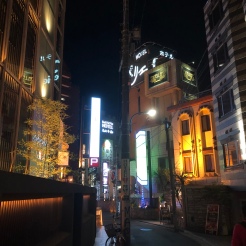 After, Mary and I made our way to Omoide Yokocho (which translates to ‘Memory Lane’, but is more commonly referred to as ‘Piss Alley’), to find dinner at one of the yakitori grills or food stalls. Piss Alley is a sensory overload, full of smoke and people and delicious things. Apparently there was a similar lane in Osaka that burned to the ground, and it’s not difficult to see why…there are open flames everywhere.

During his two years in the USA, Dai told us the only food he missed was motsu nikomi (pork innards stew), so when we found a little yakitori bar that would have us (‘English Menu Available’ sign in the front window), we went for it. Motsu nikomi, yakitori (leek, chicken, pork back, sausage, chicken skin, scallops) and, surprisingly, potato salad. It was as delicious (the Japanese love to say ‘delicious’) as the space was tiny.

The focus stayed on food the following night with our Nakano Food Tour with the Tokyo Handsome Boys, Naoki and Kevin, who I picked when I learned they also do a Tokyo Gay Night Tour. I figured that meant there was a pretty good chance they knew how to have fun.

And I was correct!

Here they are at our first stop, Niginigi, where we had standing sushi and sake. As you can see, Naoki is a bit of a card. 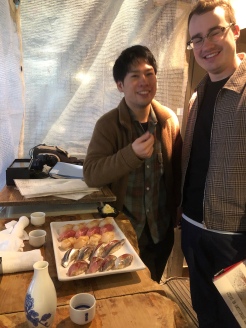 I so enjoyed the time spent with these two. Kevin was the second guest to stay in Naoki’s Airbnb, many years ago, and the two hit it off so well, they eventually formed the Tokyo Handsome Boys, with the lofty ambition of one day showing Keanu Reeves around Nakano. They had two folders – one which described aspects of Japan’s history, and the ‘blue folder’, containing Naoki’s rather-forthright information about Japan’s underbelly, which he seemed delighted to be able to show. 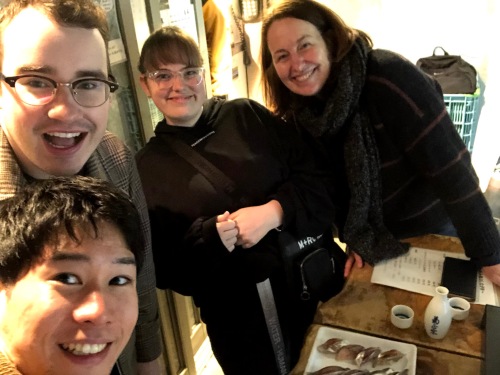 At our second stop, Yoneda izakaya (for bizarre foods, unbeknownst to us), we spoiled things somewhat by having already tried motsu nikomi, but the boys still took special delight in Mary’s ready acceptance of shark cartilage with pickled plums and hatu (chicken hearts). ‘Merry has tongue of Japanese people’, Naoki wrote later.

Stop number three, Kamon & Akko, was to cook the rivals, okonomiyaki and monjayaki, and declare a winner. Naoki is as dramatic a chef as you can imagine. I’m not sure we really needed to cover our faces with our washcloths, but he said it was necessary, so there you go.

Later, ‘as friend’, according to Naoki, we visited a sake bar, where an immaculately dressed bartender (three piece suit with a dachshund tie pin), imbued my sake with bubbles and poured it with a flourish.

The Handsome Boys were a treat. 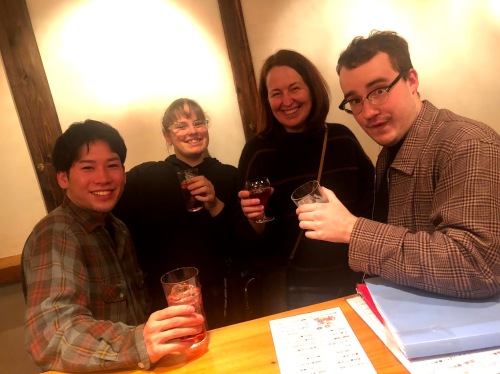