Food in Seoul has been a mixed bag. We have had some great successes and some spectacular failures, in a culture that really enjoys ‘do-it-yourself’.

On our first morning in Hongdae, we went looking for a convenience store, and found this tiny toast shop, which appeared to be frequented by a steady stream of Koreans.

It was one of the strangest, and most delicious, toasted sandwiches I have ever eaten. Ready to hear the ingredients, as I tasted them? Bacon (but it didn’t taste like our bacon at all), cheese, and a kind of cabbage coleslaw, with a faint taste of honey (which may have been in the bread). The bible passage was…well, see for yourself. 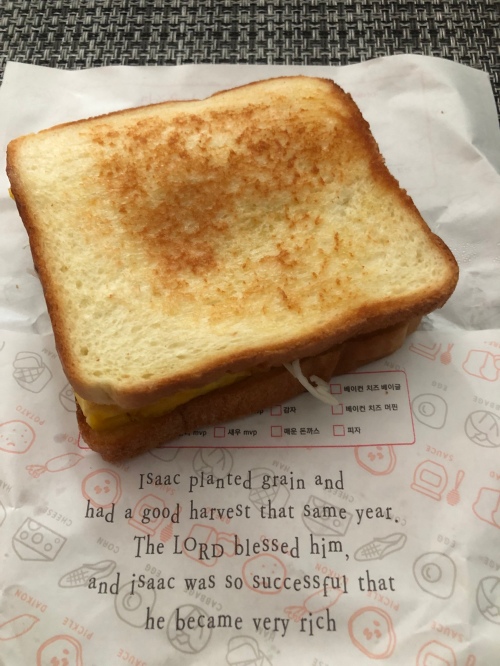 Isaac toasts became so quickly beloved, they were the toasted sandwiches we chose to soothe our troubled selves after the Pocheon bus disaster, so, despite that ‘wine and toasted sandwiches’ comment, we weren’t total mainstream sellouts.

One of our best meals came from the folder of suggested home delivery items in our Airbnb. They also seem to agree that many different food items can qualify as ‘the best’. 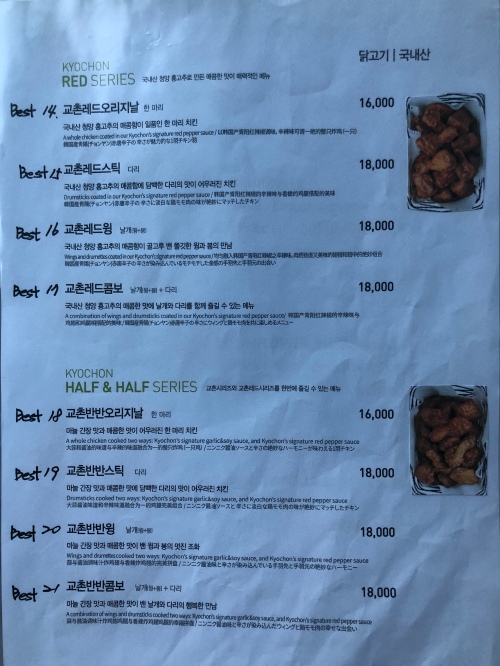 We found Kyochon about 10 minutes from home and were quickly bustled upstairs, where we pointed to chicken (half ‘garlic and soy’ and half ‘red pepper’) and said ‘beer’. Works every time! 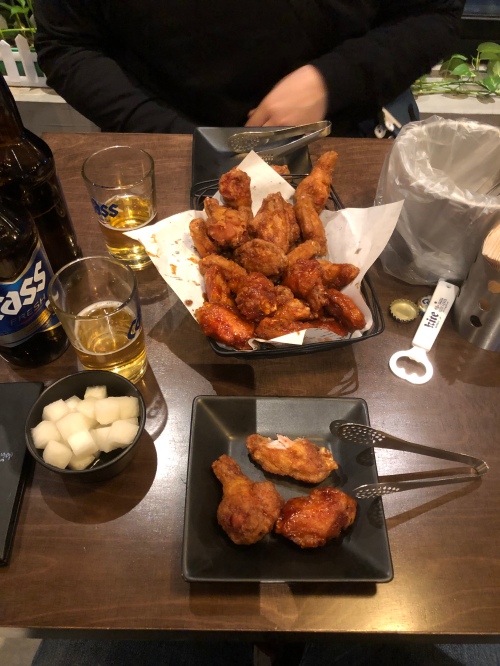 And, since we’d already had a minute to watch the people around us, we knew exactly what to do. Take the tongs and the very strange forks out of the bucket, then use the bucket for scraps, the tongs to hold the chicken, the forks for the radish (an utterly perfect post-chicken palate cleanser) and Bob’s your uncle!

But, of all the sit-down meals so far, the one we ate here may have been my favourite.

When we stood and looked at that outdoor menu, we were irritated and sulky and had just escaped from the do-it-yourself soup, then stir-fry place. And we were about to head home hungry, so we could regroup and make new plans. It was around midday, and many of the restaurants were still quite empty…except this one.

Why did we choose it? The meals were all one-pot – either ox tail soup, or ox-tail stew, with few variations. It makes for easy pointing. We ended up having to wait for a table, which was perfect, because it gave me time to observe. There were many single diners, and the tables turned over quickly, so I knew it was somewhere people came for quick sustenance, as opposed to dining with friends.

When we finally bagged a table, Mary pointed at the ox tail stew (easier to manage than soup) with rice and dumplings and held two fingers up, then I proceeded to surreptitiously watch the woman next to me, who had been seated at the same time as us. I noted the following:

This is what arrived:

So much for the stew! This soup wasn’t terribly flavoursome, however, I soon discovered this:

And, strangely enough, the whole process was somehow calming. I’m not sure if it’s because I had so much to think about or, the answer I prefer; that eating became a sort of process, which in turn gave it a rhythm, and a sense of development, because the soup slowly became richer with the addition of more and more kimchi, which went in red and came out green, leaving the soup to grow darker, like this: 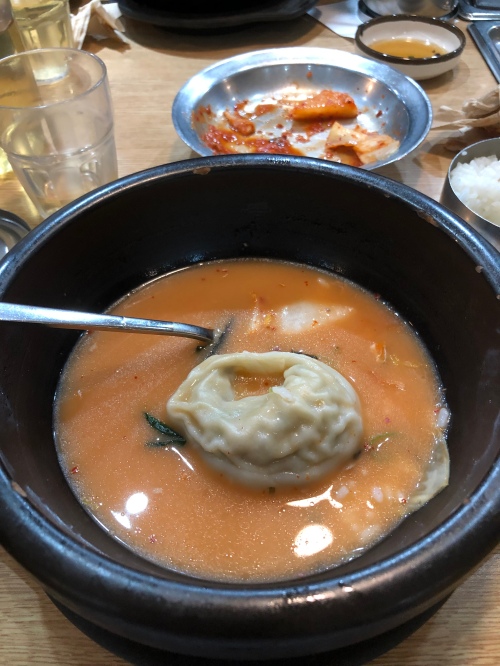 Not everything was rosy, mind you. That ‘cordial’? I have no idea what it was, but it was awful. I don’t think it could possibly have been dirty water, as Mary suspected, but how that whole room of people was able to drink it, I will never know. 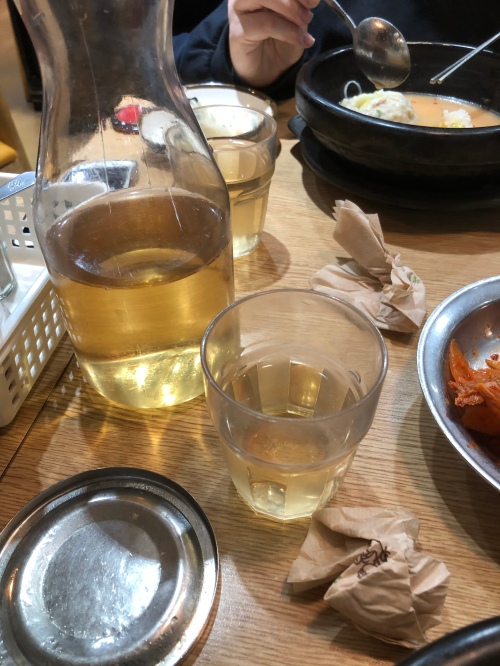 And how they manage to take the silver lids off (with sauce on their undersides), put them down, take the kimchi out with tongs, cut it up with scissors, and put the lids and utensils back without flicking splashes of red all over the place (as I did), is also a mystery. We used every napkin at the table.

What I do know is this. I went in sad and stressed and I came out soothed, such is the healing power of soup.

What it couldn’t do, however, is surpass street food as the winner in so many significant food categories:

We visited Myeongdong markets after getting back from Poncheon, and they were soon declared Mary’s favourite so far. We wondered around aimlessly, buying a bit-of-this, and a bit-of-that, for hours.

Chestnuts, from this old couple near the station:

Dumplings and fish cakes (I think they were odeng?) from our favourite stallholder, declared so after he cheerfully greeted us with a carefully-pronounced, ‘Hel-low!’. 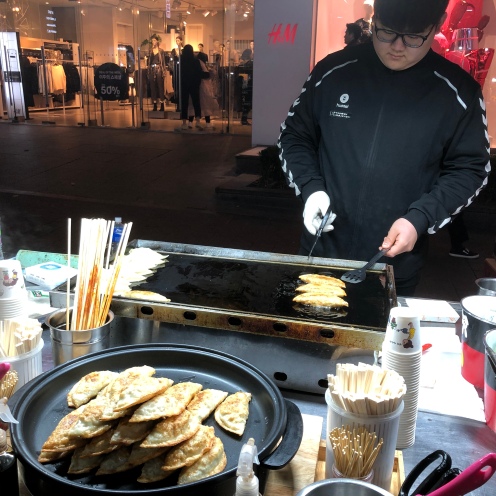 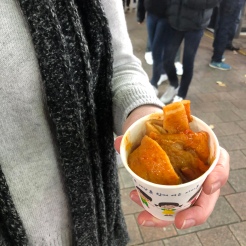 Gyeran-ppang, or Korean egg bread from this guy: 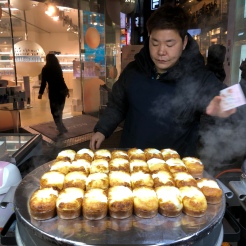 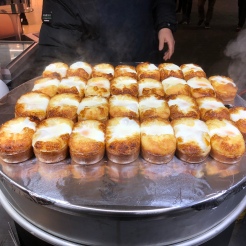 And we drank pomegranate juice. I also wanted to try the other berry juices, and wondered why we don’t juice berries at home? 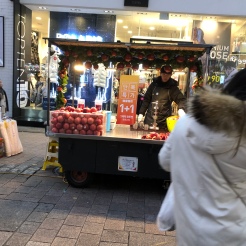 Finally, we finished off with these nutella and banana crepes, which, oddly and deliciously, also contained cereal: 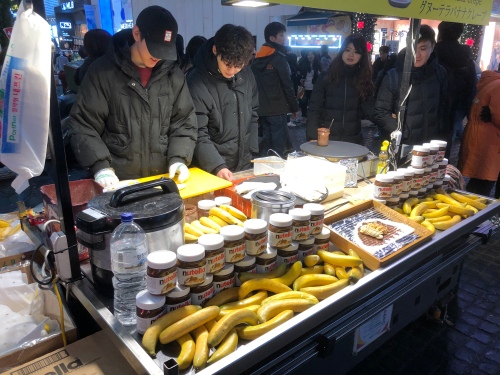 It was still stressful, however. At one stage, Mary said to me, ‘so, let me get this straight…you don’t want to eat anything, because you are afraid that by eating it, you will use up some of the hunger that could be used to eat something else?’

What can I tell you? The struggle is real.