Message in a Lantern

Sunday night was the last night of the Seoul Lantern Festival, which I was very keen to see, so, after resting our worn SMTown legs, we set out to find Cheonggyecheon stream.

Mary and I have already become subway-proficient, which I am certain is the key to enjoying an unfamiliar country. We can never seem to sit, or it somehow feels inappropriate to do so (them or me? who knows?), but we have worked out our directions and our exits, and the names of the neighbouring stations. On the way to the lanterns, Seoul showed us how pretty it can be:

The lanterns of the festival are placed along a 2km stretch of the stream, beginning with this waterfall. The stairs on either side lead down beside the water, with the visitors walking down along one side, and back along the other.

I knew as soon as we arrived that we had hit the jackpot. Combine art, food, and people (who are predisposed to enjoy the former), and what do you get? Good feelings, that’s what.

Mary and I decided to eat from the street food stalls before hitting the lanterns. We began with these two – the rice cakes (looks like pasta) that Mary had tried (and hated) once before, and this item-on-a-stick, which I wanted to try.

Mary was the clear premier-chooser here…the rice cakes were spectacular. They are difficult to describe, as are all things that don’t taste like anything you’ve ever tasted before. This is about all I can say about them –  ‘it’s like pasta, but not like pasta, and it has what seems to be triangles of pita bread in there, soaked in the sauce, but it isn’t pita bread, and the sauce is hot and it looks tomato-y, but it isn’t tomato-y, exactly’. There you go…nailed it.

I am traditionally a poor chooser. I either go too daring, for the sake of it, or, as I did here, go too fried, because I think it looks much tastier than the boring-looking pasta stuff. This was literally a dagwood dog with sugar on, that had sauce added before it was handed over. Not a culinary highlight, but guiltily-tasty, like a sneaky chiko roll.

Next, we bought meat-on-a-stick things. Yum. And I loved the couple that served them to us. Mary enjoyed this interaction too, because she understood every word they said to her. I wish we had tried some of what appeared to be a big saucepan of some kind of larvae, but I didn’t want to commit offences in both poor-choice categories in the same hour.

Then, down we went:

The theme for this year’s Lantern Festival was ‘Seoul Dream, Flowing Light’, and it was broken up into four different sections; The Launch Point for a New Dream, Seoul’s Dream for the Future, Seoul’s Shining Memories, and Seoul Filled with Traditions. Truthfully, I think someone sat down and said, ‘how can we get a giant robot creature and a running shoe in the same festival’, and figured past, present and future pretty much meant it was open slather. I didn’t mind a bit – how else would we have seen ‘retro fashion’ and ‘a faded book of poems’ beside this bad boy?

This section of the walk may have brought a tear to my eye. And if the line hadn’t been so long, I, too, would have written my wishes on a paper lantern and set it free upon the water, as an homage to the lantern I set free into the Thailand sky with my dear friend, Carol, on New Year’s Eve in 2007. 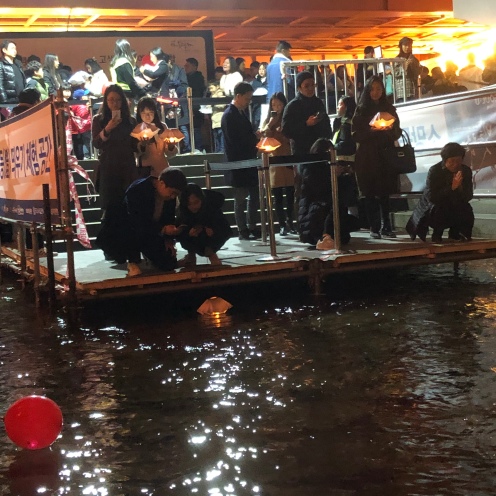 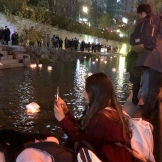 When I had stopped taking photos, I noticed an elderly gentleman reach down and set his lantern on the water. He then turned and walked, completely alone, off the platform, to follow its journey alongside the water. I captured this fairly-hopeless image of him, hurrying to catch up with his wish. I wondered what he had written, and if he felt disappointed when he discovered that it hadn’t been set free after all, but gathered up in a cluster, a bit further downstream. 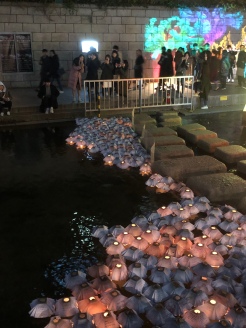 Here are ‘selfies by the light’, a fan lady who reminded me of Mum’s Royal Doulton ‘Dancers of the World’, and my favourite, the ‘Scholars’, who I am certain have blessed me with a reduction in study-procrastination for next year. 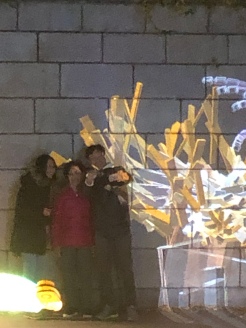 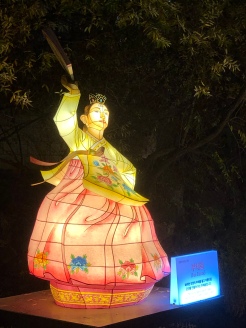 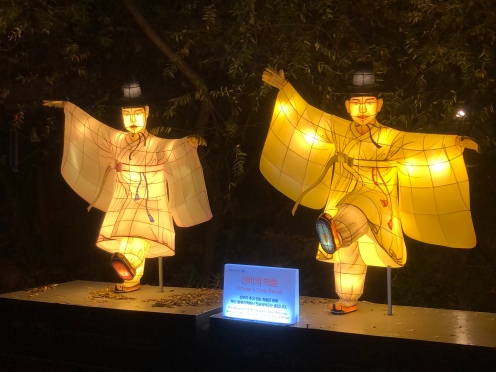 After we had had our fill of lanterns, we took a turn here, and a turn there, and ended up walking down the most extraordinary streets. I have no idea where we were, exactly, and I almost don’t want to find them again. I will always think of them as being truly Seoul. 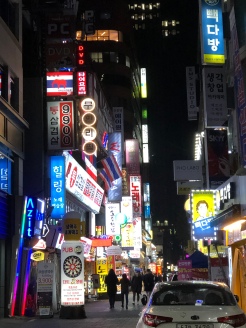 Here is a cool shot of Mary and me (so say I!), waiting for our subway to take us back to Hongdae for dessert.

We didn’t end up finding dessert, but we did find buskers, which was much, much sweeter.

2 Comments to “Message in a Lantern”