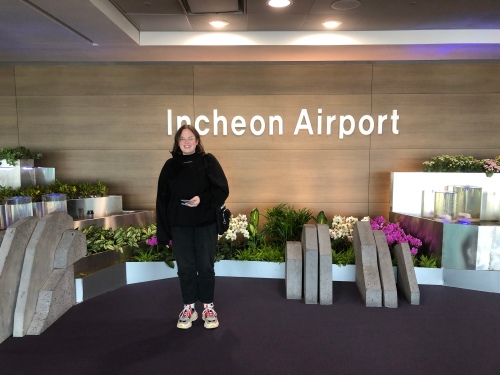 We are in Seoul.

I’m tempted to say it wasn’t easy to get here, but when I think about it, how hard can it be? Yes, the seats are small, and it’s difficult to sleep, and the entertainment selection was pitiful (China Air, you really need to up your game…something other than Mission: Impossible would be nice), but you need only sit there and wait to be fed and told what to do, and that is somehow comforting. I suspect that my brain is so constantly full of the things that need to be done, and that I ought to be doing, that I’m happy to sacrifice comfort for the should-dos to be taken off the table.

What is difficult is the constant pressure of the unexpected. Beijing airport gave us a lot to think about: not a single convenience store or chemist (Sunrise duty free, or platinum credit cards only), hole-in-the-floor toilets (perhaps aiming is a developed skill?), and lining up for an age only to discover we could have breezed through ‘International transfers’. You know things are tough when you approach a Starbucks as though it’s an oasis in the desert.

It also isn’t easy being foreign. ‘Lady! Lady! Foreign!’, barked the Chinese airport attendant in a frustrated tone, pointing towards the worthy-of-disdain group, as Mary and I attempted to line up in the incorrect queue. I vowed to be a little more understanding when the next tourist gets on the M30 at 9.30am and starts asking what an Opal card is and where she can buy one.

Mary had an interesting interaction with Chinese security:

It turns out Mary was travelling with a Stanley knife, just in case she was beset by a design-student instinct to do some last-minute woodcutting. They didn’t seem to mind in Australia.

We arrived in Seoul. We followed the instructions. This netted us our suitcases, SIM cards, Discover Seoul passes and a free trip to Seoul on the express train. We couldn’t, however, sit together, which may have been for the best, given that Mary and I were getting a little snippy with each other by then.

Seoul, from the express train window, is somehow desolate. Some areas look like giant swampy, sandy flatlands, and everything looks grey. I saw a woman feeding what looked like a dozen dogs, and a couple of goats appeared completely out of the blue on the rocky side of an embankment. Giant plastic tunnels pop up in rows everywhere (greenhouses?), and the waterways are either expansive and, again, desolate, or divided up into sections (aquaculture?). There are a lot of bridges that look like mini versions of Sydney’s Anzac Bridge. The thing that surprised me most was the clusters of what looked like giant residential towers, at intermittent intervals, in what seemed like the middle of nowhere. I didn’t understand them at all. 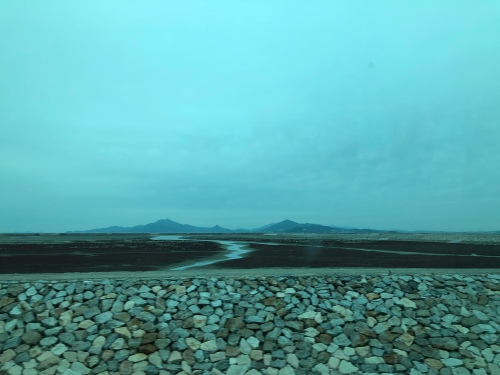 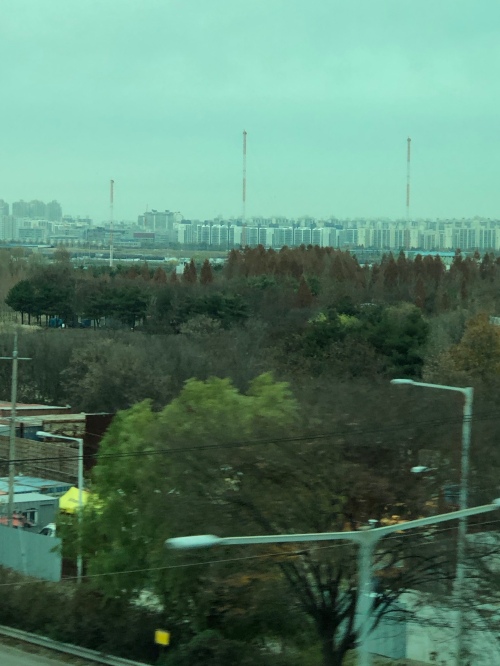 By the time we made it to our unit, we had discovered that your choice of subway exit can make or break you, that Hongdae streets don’t smell very good, and that whilst there seems to be a ‘stay on the right’ rule, on escalators and footpaths, it is often broken. To add insult to injury, our Airbnb has been photographed, ahem, ‘creatively’, which doesn’t mean it’s unpleasant, or won’t serve our needs…it’s just a long way from you-only-live-once splurge we were expecting. 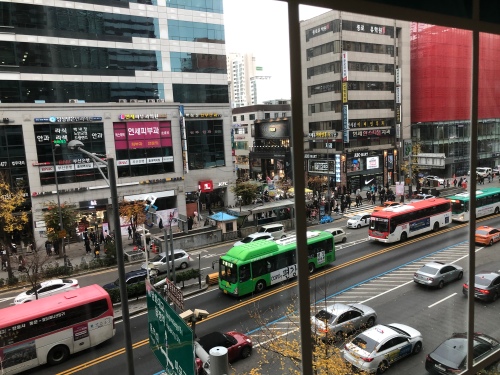 The view from our window

We showered, we whinged, we drank too many Maxims, then we finally decided we really ought to explore, just a little. 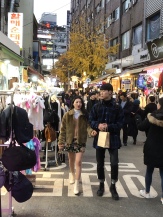 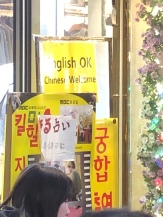 We like the Chinese…not sure about the rest of you 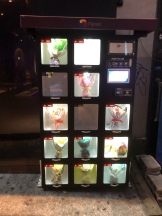 Hongdae shopping street certainly is lively. It is packed to the gills with people, and lined with small stores that remind me of Paddy’s Markets stalls, selling everything from phone cases, to clothing, to food. If we hadn’t already had a mission (find a travel adaptor, as a matter of urgency), and been too tired to make effective decisions, I suspect we may have enjoyed sampling the street food, or looking for trinkets. We weren’t too tired to see that it was essential to get this robot to make us a very bad coffee. At one stage, the machine wouldn’t release my credit card, resulting in a moment of pure panic. It was worth it.

In our last daring move of the day, we had dinner at ‘Meat-ing’. No prizes for guessing the drawcard here. It was possibly the worst choice for the tired and intimidated, requiring us to choose our food from the buffet and cook it ourselves, with the added pressure of a surcharge if you have any leftovers. I almost added uncooked meat to a plate of cooked items and had horrifying thoughts of having to cook the kimchi and gyoza on the barbeque, rather than be charged for my raw-meat contaminated leftovers. 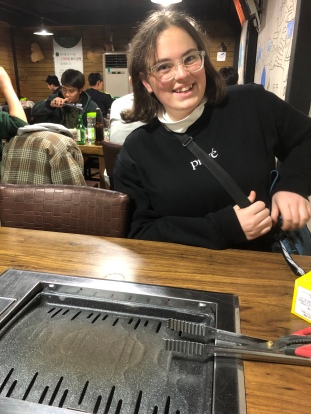 When we arrived home, Mary said:

‘It is both overwhelming and underwhelming’.

I get it. When I look through my old posts from last year (including one of the final, unpublished ones, with the most unexpected, smiling selfie), I am reminded that travelling is often hard, but I am also reassured that Seoul will reward us in ways that we can’t yet anticipate.

In the spirit of stepping out of my comfort zone, I gave Mary the pole-position bed, in front of the television, and took myself up the stairs to the loft. I’m not sure how I am supposed to fall asleep on an actual bed, without watching something I don’t really like. Here is my little corner:

Over and under. Over and out!