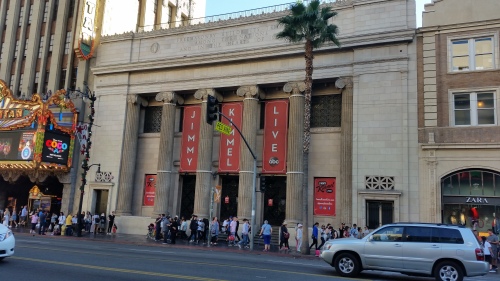 Friday afternoon was difficult to get under way. I had been on a morning outing, but by lunchtime, it seemed that Eva and I weren’t particularly motivated to go anywhere. I suspect the reasons for this were as follows:

The thought of impending holiday regret eventually pushed me, and a fairly nonplussed Eva (“I don’t mind if we go or not, so anytime is fine”), out of the shoebox at around 2pm, with a plan to follow Todd Bouldin’s  If I Had A Day In LA.

I’ll be frank – Hollywood is pretty awful. It is packed with tourists, street vendors and costumed characters who are all looking a little worse for wear. The Chewbacca looked like his entire costume was made out of poor-quality hair extensions, Freddy Kruger texted in between every photo op, and Bumblebee, who was a little vertically challenged, literally had his feet strapped to two metal, fold-out stepping stools.

Despite a steely veneer, I came undone with the rappers. A huge man with a gold tooth and a stack of discs gave us the spiel about how he had opened for the Hilltop Hoods and did we want one of his discs? Then he wrote our names on the slip cover and noted that his favourite track was number four and…anyway, you know the rest. I gave him $20. And have done several no-regrets internal pep talks since then. I can still sense Eva’s disdain…

Amongst the plethora of stars, it was difficult to find a photo worth taking. I wanted someone truly legendary or, at the very least, ironic (John Stamos, anyone?). Alfred Hitchcock was in a busy spot. Mickey Mouse, despite being extremely popular, is part of the sweatshop monstrosity that is Disney. Morgan seemed like a safe bet. He deserves major points for longevity…and playing God. 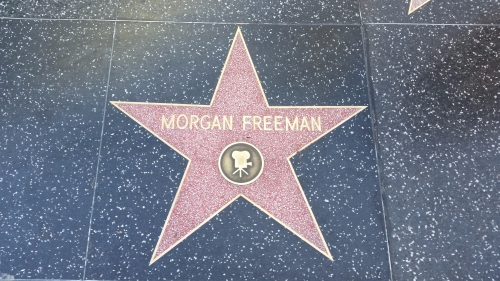 Morgan Freeman…as worthy as possible, under the circumstances.

I particularly wanted to see the Dolby Theatre, given I have watched the Academy Awards, in their sometimes-painful entirety, for as long as I can remember. If not for Eva, however, I doubt I would have noticed that we had actually parked beneath the theatre, and had exited from there onto the street. I guess I didn’t imagine that the Academy Awards are filmed in a theatre that normally validates parking tickets for tourists buying fake, six-inch, plastic Oscars. Later, from their website, I discovered: “The parking structure is open 24 hours a day, 7 days a week (with the exception of Academy Awards Sunday)”. There you go.

After crossing the road to take said photo, and aiming for a better vantage point up the steps of the the masonic building where Jimmy Kimmel films his show, Eva pointed out the giant (human) shit sitting on the top step. Later, it occurred to me that that moment pretty much sums up Hollywood Boulevard…Katy Perry’s “I Kissed a Girl” costume in the window of Hard Rock Café on top…and a great steaming shit beneath.

Later, as we did the requisite turn down Rodeo Drive, Eva and I talked about Los Angeles.

“We could just be at Surfers Paradise, with trucks…and proper palm trees.”

As a tourist destination, Los Angeles has a lot to live up to. Even as we hurtled along the freeway on our first sick, tired, over-it day, the names on the signs took on a mythical quality; Santa Monica, Mulholland Drive, Hollywood, Sunset Boulevard, Beverly Hills…

My favourite moment of the day was Eva’s reflection on Rodeo Drive:

“My favourite capitalist brand is Burberry. I really admire their commitment to plaid.”

It reminded me that this vacation (see? pretty much American now…) isn’t really about where we are and what we are seeing. It’s about being there and seeing it together. And despite things not going according to some of the best-laid plans imaginable (‘doomed’ anyone?), we are here, and we are doing it together, and that’s pretty awesome.

Good Decision: the car, hands down (and the subsequent decision to actually drive it).

Poor Decision: looking at, talking to, taking anything from anyone on Hollywood Boulevard.

Tomorrow: Warner Brothers movie lot tour, buying Doc Martens on Ventura, Soap Plant/Wacko for gifts, Koreatown Plaza (here’s looking at you, Moo!) and a visit to the winners of Season 3 of The Great Food Truck Road Race (and our favourite contestants of all time), Seoul Sausage.

PS: We went out later for wine and snacks. I may have flown 7.5 thousand miles to drink Yellowtail Pinot Grigio, but I BOUGHT IT AT A 7ELEVEN AFTER 10PM! And I got to drink it with Funyuns. So there.