Not Drowning, but Waving

Friday began well, with this cracking bowl of ‘Scottish Porridge’ for my breakfast at the B&B. According to my host, Susan, the secret is not only in the oat itself (they have to be Scottish, naturally), but also in soaking them overnight. I ate mine with fresh strawberries, thick yoghurt, and a sprinkling of all kinds of wonderful things from the small bowls in front of me. Amazing.

Then, it was off, bright and early, for the ninety minute drive to Fionnphort, where I would catch the ferry for my tour of Staffa Island. I didn’t really have time to stop and take photos, but I allowed myself this one on the coast road between Tobermory and Craignure. It was breathtaking.

Soon after, I ended up with tears streaming down my face when The Killers’ Human came on the radio, and I honestly have no idea why. I wasn’t feeling particularly sentimental. I think it was just that it was up loud, and I was singing while zipping around on a road in Scotland that required me to keep an eye out for otters. I’m going to have to get a grip though; the propensity for tears on holidays is ramping up.

It was probably lucky I got it out of my system, or the road from Craignure to Fionnphort, which leaves the coast and heads inland, would have been the end of me. I have never felt so small and over-shadowed by the magnificence of my natural environment. The photos I took of the mountains are ineffective, but I did manage (I think) to capture the sunlight, where, as at Loch Lomond, the sun shines through gaps in the clouds, lighting up some spots as though they are under a spotlight. 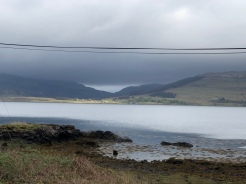 Things didn’t get off to a great start in Fionnphort. I parked, packed my bag, and got out with my coins to buy a parking ticket…and forgot to put my car into park and put the handbrake on. I literally had to jump into it, movie style, and pull the handbrake, to stop it rolling over the edge and down into the water. I would have taken a photo of the drop, but my hands were shaking too much. I took this one later, in the pouring rain.

Keep that rain in mind. 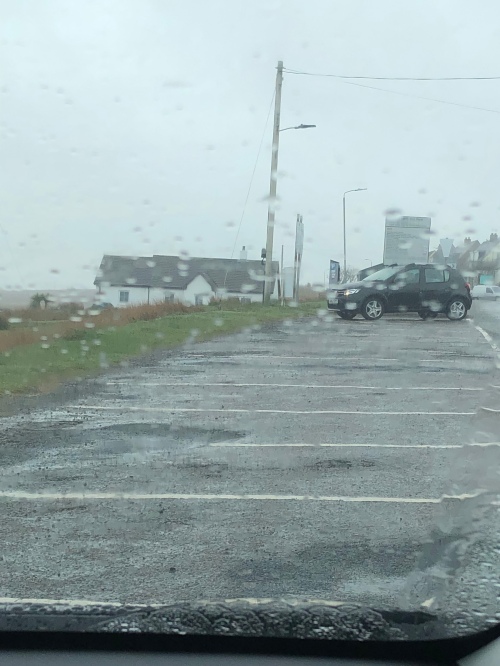 The Staffa tour was ok, but not mind-blowing. It didn’t help that our boat (Staffa Tours) had issues, so we were instead combined with another tour (Staffa Trips). Too many tourists, packed in together, clamouring for photos.

Highlights? The wild waves (which stopped us landing, but really gave us a show), puffins in the water and casual seals, and our Scottish guide saying sentences such as, ‘the excavation of the granite from the Tòrr Mòr quarry is used for construction.’ It never gets old. 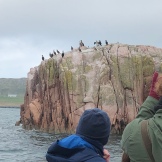 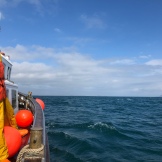 And, of course, Fingal’s Cave, the inspiration for Mendelssohn’s Hebrides Overture, made up of the columns that form from lava flow. The botanist, Joseph Banks, said this of the cave in 1772:

‘Compared to this what are the cathedrals and palaces built by men! Mere models or playthings, limitations as his works will always be when compared to those of nature.’

I see where he is coming from…although I like the cathedrals and palaces too.

I stepped off onto the island of Iona around midday. It’s a lovely spot, despite being quite battered by the winds from the sea. The paths leading to its historical sites and buildings are lined by organic gardens for the local public school and the hotels, which have their menus displayed near their plots. I had already bought a cheese and pickle sandwich from the local store (made by Iona resident, Mary), but I sure did have a hankering for a meal assembled from that produce. It looked incredible.

What Iona is most known for, however, is historical monuments, and I was keen to see the hotspots. This is the Iona nunnery, which was established sometime around 1200. I liked it here, The tourists all seemed to race off to the Abbey, making a quiet, peaceful place to stop. 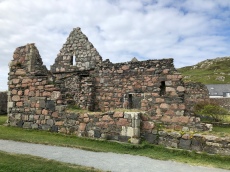 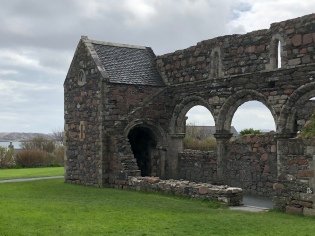 I also liked the cemetery, Reilig Òdhrain, which has been in use since the eighth century, the oldest markers now on display in the Abbey’s museum. It is said to be the burial ground for many early Scottish kings, including Macbeth. I chose to ignore the sign that now brings that belief into question. 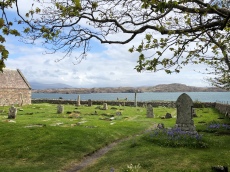 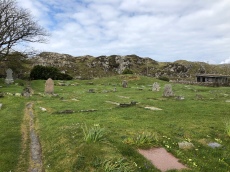 And I lit a candle for my recently-departed friend in St Oran’s Chapel, built in the 1100s and the oldest intact structure on Iona. Is it strange for an atheist to remember an atheist in an old, holy building? Probably. But I still made a donation and lit him a candle. It is left of centre and, if you look closely, slightly wonky. Appropriate. 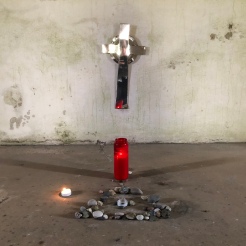 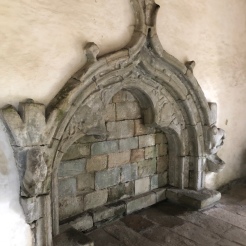 I then decided what I really wanted to see was Martyr’s Bay, where Vikings landed in 806, before making their way up to the Abbey and killing all 68 of the monks during the course of their plundering. I mean, Vikings landed there, on that sand, in 806. How extraordinary.

Iona is the very definition of picturesque. 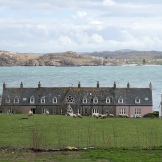 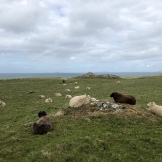 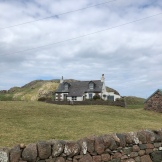 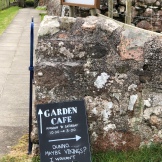 And I was so pleased with myself when I made it what I believed to be Martyr’s Bay (it involved going off-road), I took a selfie.

It was now that I decided that, based on my single successful Spit Bridge to Manly walk, I would walk around the whole of Iona. Yep. I actually remember thinking, ‘it’s only three miles long, how hard can it be?’

Pretty damn hard, it turns out.

Early days were great. The beach walk, whilst difficult (owing to the loose blend of sand and gravel) was lovely, and I enjoyed being there because, duh, VIKINGS. But, after the beach, it became about following paths that occasionally became barely visible and pretty muddy.

There was the odd footprint, which I found reassuring, however, they occasionally led me to areas that literally had no way through, such as this little path, high on the edge of this stone beach. I thought there would be a way through an opening, but no cigar. Idiot number two has to go back the way they came.

I kept telling myself to just take it easy, and walk. I mean, the island is three miles long and a mile wide, and you can see the coastline…except when you can’t see the coastline, and the terrain is endless, and all looks like this. 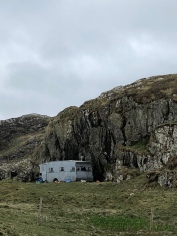 About now, it started sprinkling, which means I don’t have any more photos. This is a good thing, because I’m not sure I would have wanted to record stepping into the knee-deep bog and almost losing my shoes (never, never, never, step onto the yellow flowers when they have that bubbly look around them), which led to me having to sit and squeeze out my socks, and take off my jumper so I could use it to wipe the mud off my shoes and jeans. Not the brightest thing to do in cold weather, but if I’d used my t-shirt, I may have been caught in my bra by something other than a sheep.

I needn’t have bothered with the mud cleanup. It soon started raining, and when I say raining, I don’t mean that paltry sky to ground drizzle that we get in Australia. I mean great sideways sheets of rain that whistle and threaten to blow you over. I put my backpack under my raincoat (good raincoat, by the way), but this meant I couldn’t do up the middle few buttons, so I ended up with a patch of wet over my stomach as well.

I’ve never been so relieved to see the top of a building in all my life. I couldn’t open the final gate, so just clamoured over it, hoping to heaven that nobody was watching me from the window of the neighbouring building. I later discovered I had missed Martyr’s Bay entirely, walked halfway around the coast and cut across the middle.

When I made it back to the Abbey, which I hadn’t yet seen, I was dismayed to find an entrance building where visitors are required to pass through and pay a fee. And if I didn’t know how I looked then (I knew), I certainly saw myself through the face of the young gent that greeted me. My feet literally squelched across the floor to the counter, leaving not just wet footprints, but a trail of mud and moisture behind me.

‘Would you like a headset?’ he asked, without a hint of concern for the amount of moisture dripping from my head. I played it casual, ‘No, thank you. I think I’ll just have a wander around.

I tried to give the Abbey its due, and not be distracted, but frankly, I am freezing about now. My hair is plastered to my face, and my feet have been in the equivalent of a foot soak for about two hours. 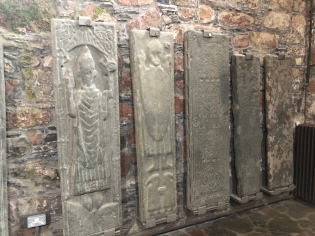 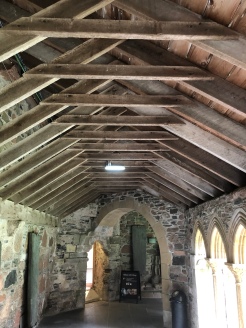 It poured all the way home. I decided to forgo the ease of tag-teaming behind another vehicle on the single track road (there is such a rich etiquette to managing those passing areas!), so I could use the vehicle for scale, in an effort to capture what this part of Mull looks like. See how big the mountains are? They are all topped with mist.

Later, the Mull Music Festival was…

…lol, just joking, I ate a muesli bar and went to bed at 7.30pm, after hand-washing my clothes in the bath. This was the INSIDE of my jeans.

I really need to start questioning my choices.