Castles in the Air

Another day, another road trip, its soundtrack pulled from the stack of CDs in the console; the Bee Gees, Johnny Cash, Dolly Parton, ‘Tartan Tops’, and ‘Country Classics’, which leads with Jimmy’s favourite, Dr Hook’s Sylvia’s Mother. We pulled into a truck stop for breakfast, which provided yet another in a long stream of opportunities for Jimmy to demonstrate the art of being a Grumpy Old Bugger.

‘Two breakfasts.’
The girl at the counter, heavily mascara-ed and chatting to her friend as we arrived, replied, ‘which one?‘
‘Joost give me two breakfasts.‘
‘We’ve got four. Which one?‘
‘AH JUST WANT TWO BREAKFASTS‘

I am chief diffuser. I smile and communicate my preparedness to break the impasse, and they immediately look to me with not-inconsiderable relief. I chose the most-Scottish option, and back-patted him over to his chair. Here we are, about to consume a breakfast that will keep me full until dinner. Jimmy has just scraped the froth off his bowl-sized cappuccino with, ‘I HEITE it when they put so much chocolate on ‘n aw…’: Photos make him laugh, or pull faces:

A quick car wash, (‘Ah just want a wash ‘n wax‘ – not everyone can be saved), one wrong turn, and a few extra spins ’round a roundabout later, we turned the corner to Stirling Castle.

I’m not going to rave on about history, or the impact of seeing things from so long ago, but when I first clapped eyes on Stirling Castle, I yelped, ‘Bullshit!’, and ‘Oh. My. God!’ as I desperately tried to snap an image that would communicate the scale and position of this building, completely oblivious to the fact that there would be countless postcards doing a much better job than me in the gift shop upstairs. Take a look at this thing:

The first record of Stirling Castle is from 1110, when King Alexander I dedicated a chapel there. Mary, Queen of Scots, was crowned there in 1543. Bonnie Prince Charlie tried unsuccessfully to take the castle in 1746.

Along with a teaming mass of tourists, of course. We almost didn’t get in, owing to the Queen’s Birthday gun salute at 12pm. I tried to sway the parking attendant, but pity doesn’t have nearly the impact of charm (what can I say? ageing sucks), and we ended up a kilometre downhill, having half a pint at 11.20, and working out our next move.

.Fortunately, we found the G Forth (go forth?). See how happy we are? 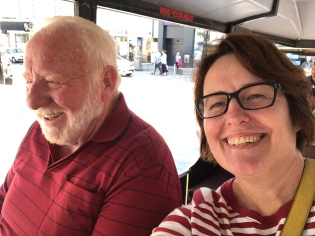 Jimmy was unimpressed with the entry (‘it has noothin’ on Edinbuhruh’):

And I was unimpressed with the tourists.

I understand tourism, I really do. After all, I am a tourist, much as I like to think I’m ‘not like the others’ (I’m not like the others). I understand the need to maintain old buildings, and the cost required to do so, and the desire to give visitors as full an historical experience as is possible. But there is something about ‘Mary Was Here’ tote bags that shits me to tears and, if you’re going to dress up like a Lady in Waiting, wear proper shoes, and don’t be talking about drinks on the weekend with the Gentleman of the Bedchamber.

Perhaps someone else is becoming a Grumpy Old Bugger.

Here are my paltry efforts at capturing Stirling Castle: 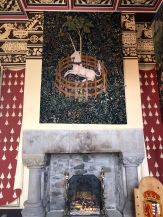 The cannon sights look out over a cemetery, which is somewhat sobering:

After ice-cream, considerable tourist mockery (when foreigners speak nearby, I now just turn and say, ‘not ONE word out of you!’), and more G Forth, we set off for home, counting Eddie Stobart trucks, and chastising drivers who don’t consider the right two lanes as being for overtaking only (I am on board with this). 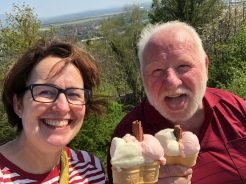 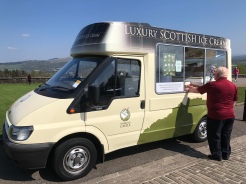 Later, I saw a castle in a different light, with my nine-months-junior cousin, Scott, who showed me through Carlisle Castle, the centre of history in the city that has been his home for 24 years. This is the castle that he explored in his youth, and where my father played with his brothers, which is remembered most fondly by Jimmy. Less imposing, but also less tourist-driven, Carlisle Castle was empty and quiet and sombre.

Instead of back-lit screens inscribed with Tudor fonts, there were spartan dungeons, dark and icy cold despite the heat outside, with smooth stones where prisoners were purported to have licked the moisture from the walls. We panted whilst climbing the steep winding staircases, which gave us an opening commonality, cousins in middle age, with faded memories and what-ifs and contrasts between us. 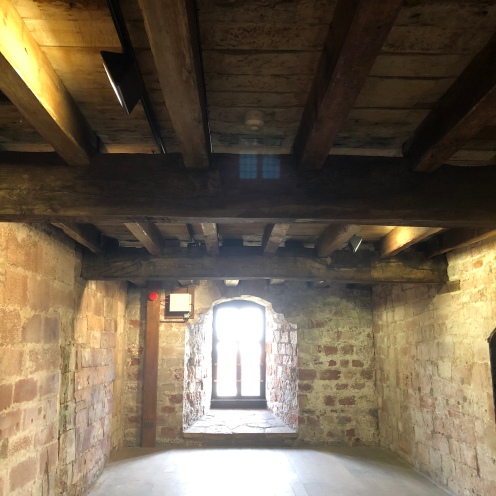 We aren’t so different. Our opportunities may have been, but, in the end, our lives are made up of work and family, and the day-to-day endlessness of being human.

My plan for Scotland saw me hiking in the wilds, eating Scottish salmon and grouse, waxing lyrical about the highlands and the lochs, and feeling a deep love for my father’s homeland. I would converse with the locals (an extrovert at last!), and uncover a previously-unleashed love of scotch whiskey, which I would sip during impromptu piano sets, with a fiddle on one side and the spoons on the other (pure fantasy – I don’t play that well).

The reality couldn’t be further away. Yet, I have learned more about myself and who I am from the chops and peas, the ‘baccy and lager, and the tall tales from the small villages of Scotland that I think I ever would have otherwise.

I wouldn’t have it any other way.

2 Comments to “Castles in the Air”