Journey to the New World

Japan did not get off to an auspicious start.

Our first task, upon exiting the terminal, was to buy ourselves SIM cards. I had pre-ordered them in Seoul, meaning it was just a matter of finding the pick-up location, because I knew it would be the single most important thing to do, if we were going to find our way around. We had a friend in Osaka, so it seemed less urgent, and I guess there may have been some overconfidence at play as well.

The guy at the SIM stand was lovely. Helpful to a fault, getting our phones going and running to charge my card at an alternative location, because his stall only accepted cash.

It was only when we got on the train to go from Osaka station to Sayo’s place in Awaza, that I realised we had overpaid rather dramatically for our 15 days of data. To be fair, he showed me the sign that said 9,000 yen each, but we had just come from the land of the 100,000s, so it didn’t set off any immediate alarm bells.

I spent the entire (long) train journey (NOT the express) with perspiration trickling down the centre of my back (it’s warmer here), and trying desperately not to cry.

But soon we were at Sayo’s gorgeous little unit, looking so much like where I would have expected Sayo would live, with its yellow fridge and craft corner and collection of ET dolls. 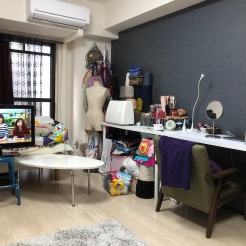 And before you know it, she had whisked us out for dinner in downtown Awaza, where we met her friend Kokoro (‘it means heart’) and drank sake and smoked (!) and ate things so wonderful, I clean forgot to photograph them. This is all I have:

After a wonderful sleep, taking up the entire floor of Sayo’s unit, we packed up again, stored our cases, and headed for Shinsekai. Created in 1912 as a tourist attraction, this area suffered from corruption and bombing during WWII, which turned it into one of the poorest areas of the city, until the 90s, when a whole new generation saw something of its appeal.

These days, it is exceedingly popular, judging by the people we saw, who were an interesting mix of locals and visitors. In English, it is called the New World.

Sayo is an extraordinary person. I’m tempted always to refer to her size in descriptions, but I will just start and finish now by saying she is the very epitome of petite. And has no trouble whatsoever asking perfect strangers to take photos and give us free games and explain directions. It felt like she approached people all day, and was still talking to them 10 minutes later – that’s the kind of person she is.

We saw Tsutenkaku Tower, which was originally modelled on the Eiffel Tower in Paris. 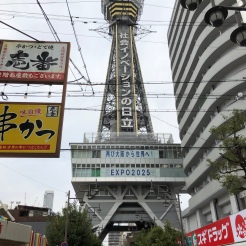 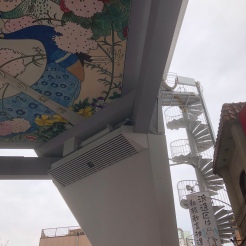 And Jan Jan Yokocho, the retro arcade, where we tried our hand at shooting (hopeless), and saw men seated in rows in games parlours, and felt sorry for the snapping turtles who were waiting to be turned into lunch. 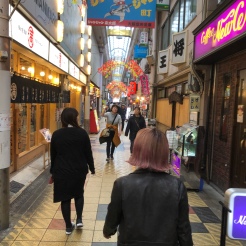 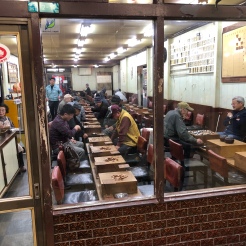 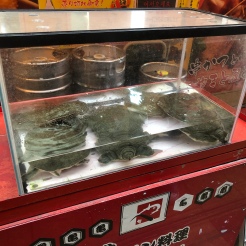 And rubbed the feet of Billiken, ‘The God of Things As They Ought To Be’, statues of whom are all over the place, their feet worn through from excess rubbing. When I read about him later, I discovered Billiken (who I assumed was some ancient Japanese god), was actually originally designed by an art teacher from the USA and is the mascot for Saint Louis University.

I now feel better about having missed a bunch of his feet. 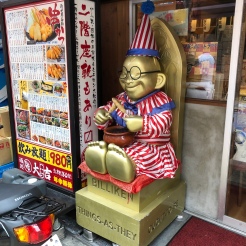 Then, joined by Sayo’s friends, Kana and Alex, we ate okonomiyaki and kushikatsu, using our phones to interpret the names for things (‘do you know what is…ten-don?’ – back right in the bowls of sides below, along with jellyfish and cucumber and chicken neck meat), and learning the unspoken, unwritten rules of Japanese dining (put bags in the basket under the table, use the washcloth to wipe your hands before eating and, whatever you do, do NOT double dip in the sauce, but use the cabbage as a vehicle to transfer more over to your plate). When I asked what the bottom item on the right photo was, Sayo and Kana looked at each other and both started used their hands as fins, as they pulled fish faces. 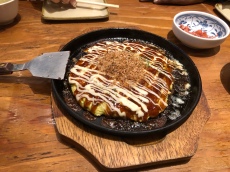 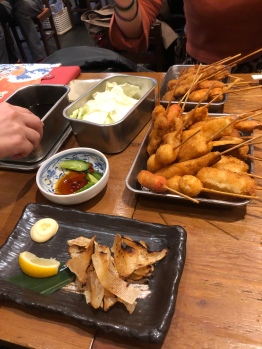 Other than the Korean version of The Big Issue that was being sold on a street in Seoul (which I snapped up on the spot), I haven’t really wanted to buy anything while we’ve been away. Sayo soon changed that when she took us to Osaka’s Tower Knives, where she asked the attendant to give us an explanation and demonstration of the knives. I decided to give one a go after watching Alex cut a slice of tomato that was as thin as paper, and discovered that Japanese knives can slice through a carrot as though it’s jelly.

I really wanted to buy one for everyone I love.

Throughout the day, Sayo managed to pull off something that I wouldn’t have thought possible, which was to get Mary and I to engage repeatedly in the taking of novelty photos. There was hardly a moment that she wasn’t putting us beside a life-size superhero (not for publication), or behind a giant biscuit box (definitely not for publication), or into a photo booth. And I really appreciated, because I really enjoyed it. 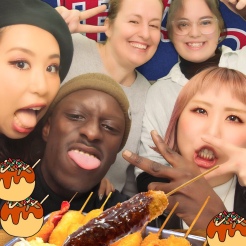 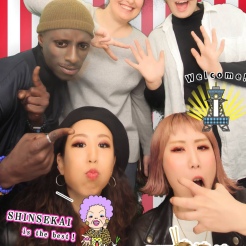 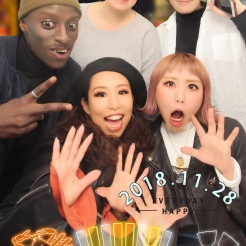 It is confirmed; new countries are easier when you have a friend to show them to you. Thank you, Sayo, for taking us to the New World.