Things I Have Noticed: Seoul

(As David Attenborough) “80% of the world’s black, puffer jackets are found here, on the urban streets of Seoul”. Yep, I reckon it had to be 8 in every 10, and another 1 in 10 was in a stark white puffer. This guy was part of the outrageous 1 in 10. I was terribly drawn to each and every one of them, which I think says as much about me as it does about them. The sad part is, I kind of wanted a black, puffer jacket.

The men (did I just not see any women?) spit. Great globs of it, and, as you get more off the beaten track, the hoiking steps right up. Initially, I looked down, because I didn’t want to step in it…but that meant looking at it, which was much, much worse.

K-pop plays everywhere. Sometimes, there is so much music coming out of so many different doors, it’s hard to isolate a single song. And the people here sing. It isn’t unusual hear someone singing on their bike, or beside you at the lights. Mary pointed out the karaoke bars on every corner.

Recycling is taken very seriously, with waste being separated into up to four categories, even on the street.

There is an area like this inside the entrance to dwellings, where you are expected to remove your shoes, and put slippers on. There are different slippers in the bathroom, indicating you should swap when going into wet areas. I didn’t slip into the habit easily, but suspect it may be a very pleasant one. 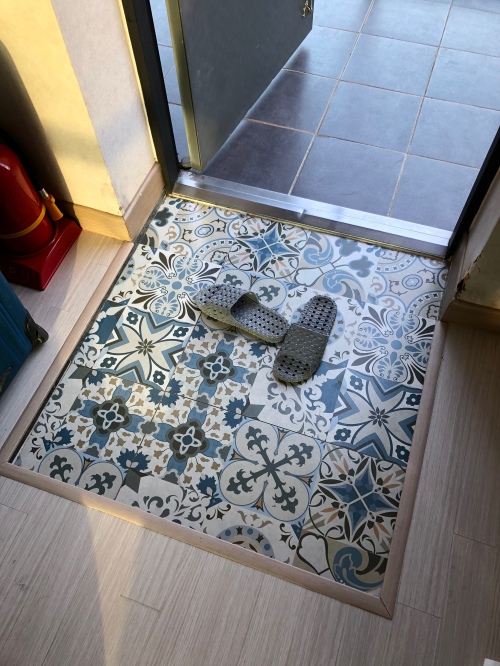 Don’t ever press the button at the crossing. It signifies the presence of someone who is blind or disabled, and makes the lights change faster. We did it once, and were silently accused of doing it twice more (everyone assumes it’s the tourists), despite being entirely innocent.

The women here hold hands in companionship, across all ages. And I think the older men are more inclined to handle each other as well. Twice, I saw an older gent supported by a friend on the train, when they had become only a little unsteady.

On most days, we literally did not see another non-Korean person.

I counted five men with facial hair, and two of those had so little, they barely made the list. I did, however, see this advertisement in Busan (not Seoul, but it caught my eye). It’s signed, so I figure he is a celebrity of some kind, and may already be known for his quirk. Or perhaps Busan is just a little looser…we weren’t there long enough to see. 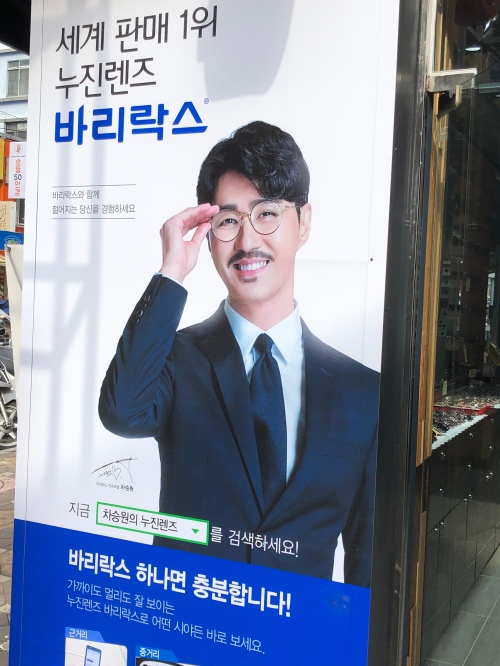 It is absolutely acceptable to walk around with a curler in your fringe. I assume the eventual curling is in aid of an event (special occasion later?), but nobody looked like they were dashing out quickly without being quite ready. There were quite a lot of them, and they definitely weren’t all dancers.

Matching outfits for couples (or, less commonly, family members) are not unusual. If not the full-blown matcharama, single items, like shoes or jackets or bags, are quite common. My favourites were this family at the airport in Busan (again, not Seoul, but the trend carried), with twins wearing jackets to match their dad (I could only get one twin – photographing people surreptitiously is hard).

We saw very few dogs, and those we did were mostly tiny, clothed and/or carried.

And, finally, I couldn’t work out the face masks, but it wasn’t for a lack of trying. They are interesting to me, because the type of wearer and reason for wearing both seem to cover the gamut. As far as I can ascertain, the wearers fall into one of three groups: