Not the Last, but the First

On our last day in Seoul, we decided to do a tour of the DMZ. After reading the requisite number of reviews, I thought I had a pretty clear idea of what it would be like – a busload of tourists (is that the collective noun?), a guide with a mic, and rapid-fire sightseeing checkpoints, all rounded out with a ginseng sales pitch on the way home.

And that’s exactly what happened.

Our guide, Katie, didn’t try to hide the fact that she had done this tour to death. She knew exactly what needed to be done and how to achieve it.

‘Share a locker, it’s faster’
‘If there is a line on the first floor, go straight to the second’
‘If you leave exactly 10 minutes before, you will have time to see both’

This is the Freedom Bridge, which crosses the demarcation line between North and South Korea. Prayer ribbons are tied nearby, carrying messages of love and hope for peace and reunification. Thinking about the loved ones who had been separated made for a thoughtful and sombre experience. 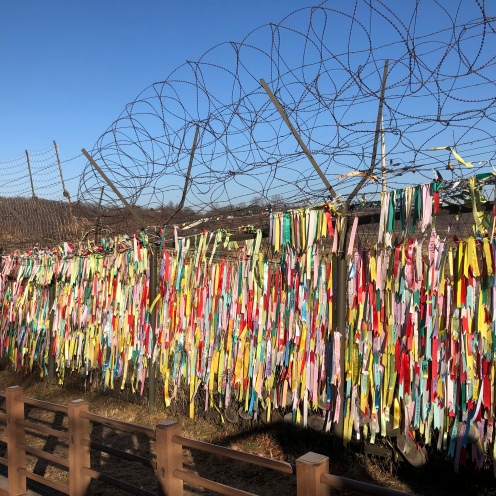 Trekking down into the ‘third tunnel of aggression’ was an interesting, if tiring, exercise. Although the walking had nothing on the bending (1.8m tall, my arse). In the end, I was so sick of twisting around to try and see where I was going, I decided to just bend forward and look at the ground and let my helmet bang against the roof beams as necessary (a technique which had the added benefit of keeping the steady stream of petite, upright walkers coming from the opposite direction out of my line of sight).

For the record, the electronic sign at the end of our tunnel access told us it had been 23,861 days since the Korean Armistice Agreement was signed on the 27th July, 1953.

Our next stop, Dora Observatory, yielded this. A picture of North Korea, and the opportunity to spot the markers that differentiate one country from the other, such as the green (South Korea) and grey (North Korea) electricity poles. 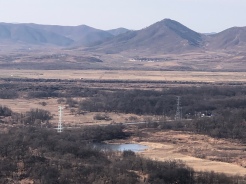 Dorasan Station was also interesting, as the train station-in-waiting, shining and new and ready for action.

‘Not the last station from the South, but the first station towards the North’. 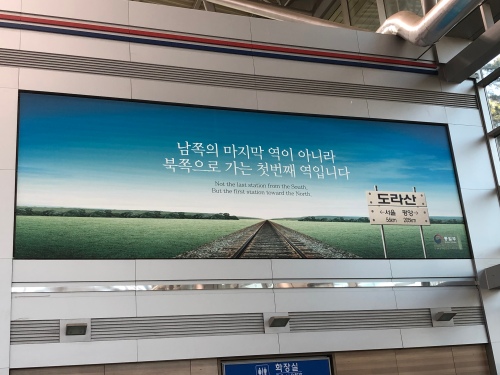 The station space is currently lined with images taken of Kim Jong-un and Moon Jae-in, during the latter’s first visit to North Korea in September. I’m not sure about the doves in this centrepiece. I see the effect they were going for (IT. IS. PEACE.), but it looks to me like they’re about to get eaten.

It feels a little unfair to follow a dictatorship with fun and frivolity, but there you have it. It is what it is. Mary and I wanted to be locals for our last night in town, so we stayed in Hongdae, and went shopping for a new bag for Moo, at the cool shop with the even cooler dog:

Then we went bowling. The symbol for ‘I didn’t knock any pins over’ is universal. 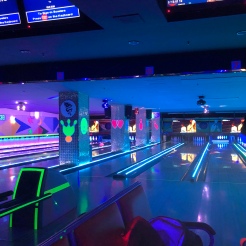 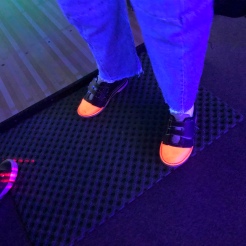 We then handled dinner like, dare I say, total grown-ups. We really wanted the melty, cheesy stuff, so we found a place that had it, ordered it and ate it (and gave repeated, silent thanks to the gods of Kpop that we had lucked upon somewhere where the servers do all the cooking for you). I liked that our wall was marked with the splatters of diners past. 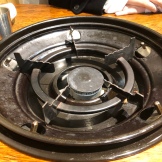 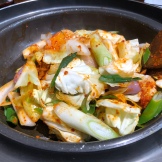 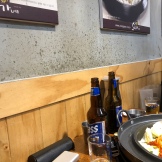 Dak-galbi (spicy stir-fried chicken) is delicious. Very innocuous on arrival (is it going to be enough?), it soon becomes a rich, incredible-smelling, literal ‘watched pot’. We trusted that the boys knew exactly when to add the cheese, so it would all be ready at the same time, and that trust was not misplaced. 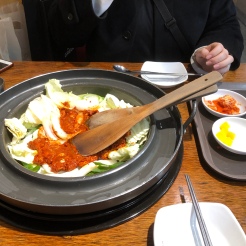 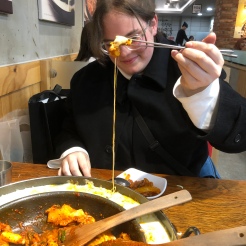 We are pretty much Korean now, so are drawn to odd dessert cafes that sell snow ice concoctions, with mango, apple, cubes of cheese and evaporated milk pour overs. 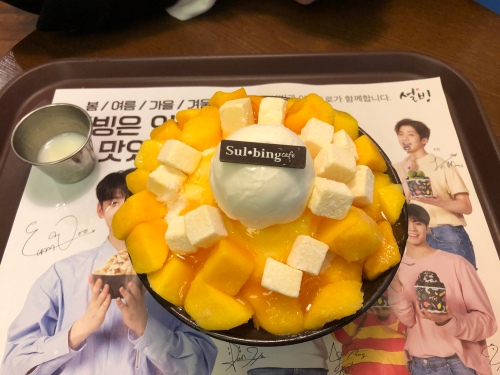 Here’s to our last night in Seoul. Is it too ‘cheesy’ to say it’s the first night of the rest of our trip?

One Comment to “Not the Last, but the First”