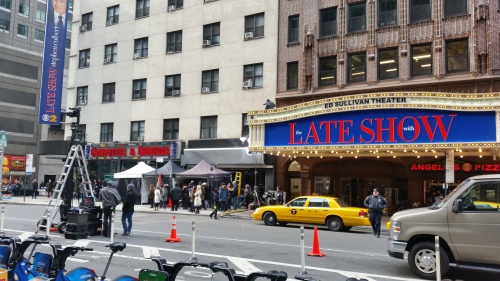 Friday was dampened by THE PASSPORT ISSUE, which had cast a pall over things.

Long story short(er)…before boarding the plane to New York in New Orleans, we discovered that Eva’s passport wasn’t in the ‘special black bag of very important papers’, despite me returning it to there every (other) time. She still managed to board, after an ID check and a pat down from airport security, while I crossed my fingers that it was in our checked luggage.

This presented the longer-term issue of, oh, you know, NOT BEING ABLE TO GET HOME, but it also created the more-immediate dilemma of when to report said loss. On the one hand, reporting it early means fulfilling your passport and insurance obligations, and gives you a longer time frame within which to organise a new one. On the other, delaying it means there is still a chance it can be located and returned.

We decided to hedge our bets. We knew Eva had entered the country from Mexico with it, so that limited the loss zone. I spent the morning lodging lost and found reports with the airports and airlines, contacting Airbnbs and obsessively over-researching the possible outcomes (which was about as helpful as self-diagnosing medical symptoms).

Finally (thankfully), hunger drove us out. We decided to combine the necessary (revisiting the Korean supermarket to stock up on ramen and peperos), with the tourist (walking through Times Square and taking photos of Mood Fabrics, from Project Runway).

I honestly had no idea that Times Square was just a giant advertising convention.

It’s not quite as grotty as Hollywood, but it’s definitely still the place where a variety of buzzards circle, eyes peeled for tourist victims, weakened from their freezing cold ears and the stress of never choosing the right subway exit. I’m a seasoned traveller these days, of course, so when someone tried to press a promotional CD into my hand, cold ears or not, my refusal was impressively firm.

I waited a while to get this first pic, so I could catch the “Impeach” under the image of Trump. He only managed 10% of the vote here in the last election…no doubt a reflection of why I like it so much. 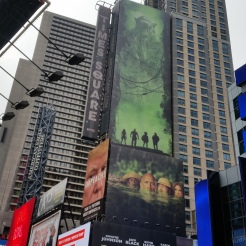 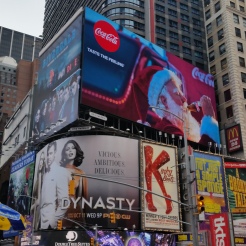 We then headed to Guy Fieri’s Guy’s American, where we had tentatively planned to have lunch. I wasn’t unhappy when Eva backed out. I like watching Diners, Drive-Ins and Dives as much as the next person (with nothing better to do than watch an everlasting stream of cooking meat), but it isn’t so much about food, as travel and entertainment, and I wasn’t quite so keen on paying Times-Square prices to fund his collection of classic American cars. We took a photo instead. 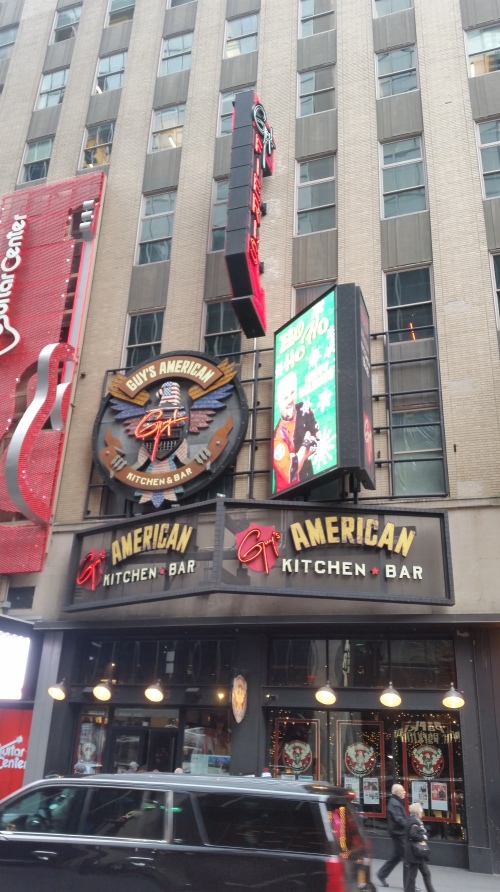 An alternative presented itself that I was far more excited about: Shake Shack, the single food cart that was so popular, it became one of the fastest-growing food chains in the country. Discussions with my fabulous foodie friend and a recommendation from Dan made it a must-try fast-food option, however, the timing had its limitations. It was PACKED, which meant photography wasn’t going to be easy. I did my best…I’m sure you’ll agree that the creamsicle float is a standout item here, with the purple cow running a close second. 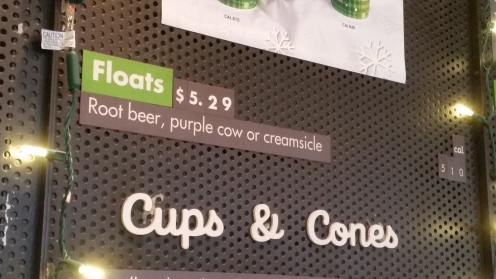 Ok, so the food is excellent. The burgers have an authentic grilled taste to them, and the fries are crunchy and golden and crinkled, just the way I like them…and the cheese sauce actually tasted like cheese, not some strange plastic cheese imitation. The shakes (peanut butter and salted caramel) are almost too thick to suck through the straw, and aren’t ridiculously over-sweet. And Shake Shack is organised, with plenty of neat ways to make things as efficient as possible, like hand-out line menus, food-collection buzzers and receipt codes to enter the restrooms. I would go again.

Next stop: Mood Fabrics (look, Mary!). For anyone who has seen Project Runway, Mood Fabrics is an institution. People make decisions within these hallowed walls that either make or break their journeys to New York Fashion Week, making it a must-see on our NYC tourist calendar. What I didn’t expect, is for it to be on the third floor of the building, and accessible only by elevator. This is Mood Home, which is situated on the ground floor. 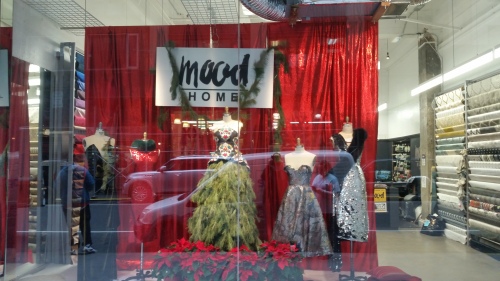 Little did I know, but I was soon to experience the moment that decisively ruined our Friday. Remember that neat little system at Shake Shack, where you use the code from your receipt to use the restroom? Standing at the counter at Mood, I realised my purse was sitting in that restroom…and we were a 20 minute walk away.

My world really did go blurry for a second, imagining the implications of being without a passport, and money, and cards, and identification.

Enough of the dramatics…someone handed it in. But Eva and I were done. It was time to go home and hide.

When I emerged on Saturday, my coffee run came with a light sprinkling of snow. I’m not sure you can see it in this picture, but it’s there. 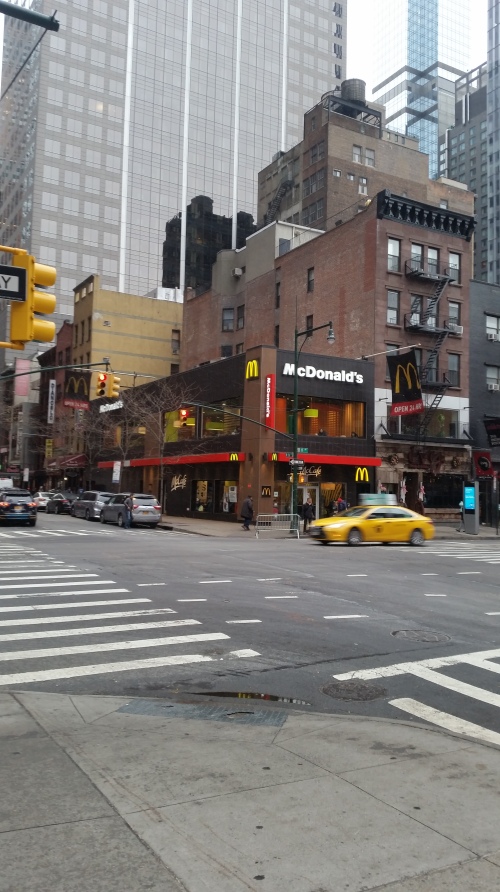 I don’t mind saying I was incredibly thrilled about this. The last time I saw actual snow, falling from the sky, was in London when I was 13 years old, and I felt the same sense of quiet wonder that I did all those years ago (I may have teared up a little). 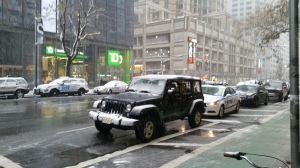 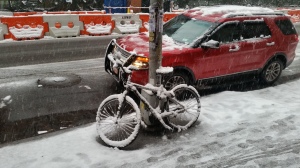 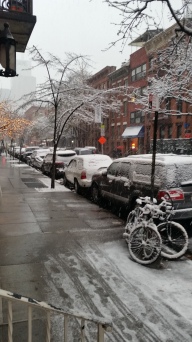 After I had exhausted my snow excitement, (“look, a snowflake landing on my nose, and it doesn’t look like a single other snowflake in the world!”), I began to realise a few things:
1. snow melts and becomes water, which is wet, making you, your clothing, and your inappropriate footwear, wet
2. snow freezes and becomes ice, which is slippery
3. snow gets in all the outdoor ATMs, rendering them unusable, and you unable to get cash for the change machine in the laundromat
4. snow is f*cking cold

We had soup for dinner, from our local Soup Man, which served as the original inspiration (and location – there is whole chain now), for Seinfeld’s Soup Nazi. They were out of lobster bisque, which was frankly a travesty, but we were pretty happy with our pea and ham and corn chowder. They include a piece of bread, fruit and a chocolate with every soup, which is interesting. Perhaps it didn’t occur to anyone that putting a chocolate in a bag with hot soup probably isn’t the best idea. 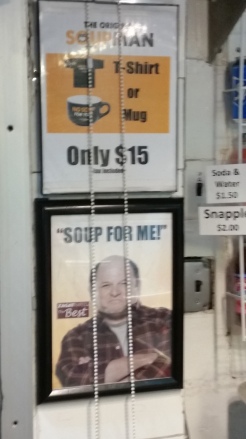 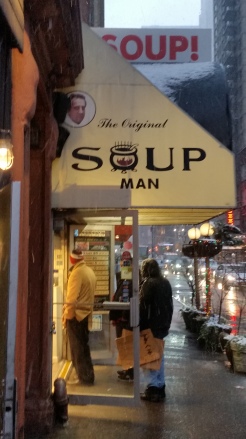 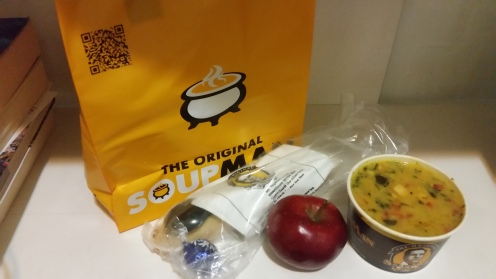 This photo is taken from the steps of the building we are staying in…how pretty is it? 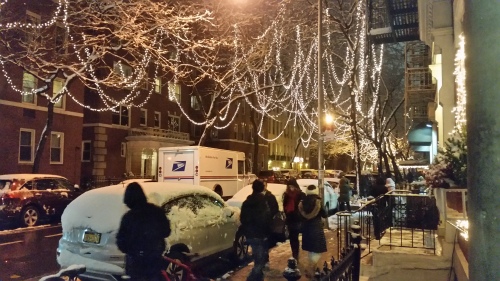 4 Comments to “The Passport Issue”