The pickup time for Thursday’s visit to the pyramids of Teotihuacan was 7am. Eva was out, and no correspondence was being entered into on the matter, so I dragged myself out of bed before dawn and, fuelled by Maxim (Korean instant coffee…you should try it), set out to meet my guide for the day, Sergio.

Now, when I was planning this holiday, the pyramids weren’t necessarily that high on my list. They were Eva’s choice (I know, right?), with her argument being that if you have the opportunity to see them, then you probably should. I agreed with that sentiment at the time, but was now painfully aware that, of the two, bed was a very appealing choice.

Sergio stopped on the way to casually show me some more Aztec ruins. The church on the right lost its bell-tower in the recent earthquake, which I found tremendously sad.

We were one of the first to arrive at the pyramids. First things first: confirm that they were not, in fact, built by aliens (I LOVE the tick and cross system…).

The building of the pyramids of Teotihuacan began over 2000 years ago and, at its peak, the area was said to cover over 30 km2 and provide shelter for up to 250,000 people. The two main structures, The Pyramid of the Sun and the Pyramid of the Moon, are 65m and 45m tall respectively.

The Pyramid of the Sun

The Pyramid of the Moon 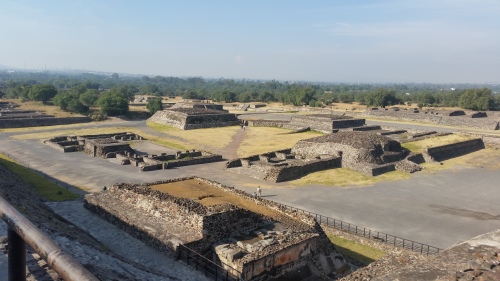 Sergio was a tour guide on a mission. He had what was evidently a well-utilised tool…a book of current images of the area, with overlay pages that showed how they may have looked, back in the day. He was inordinately fond of saying, “here is a picture of what we are looking at” – *dramatic pause* *turning of the overlay* – “…and HERE is what it may have looked like!!”. I have to admit the impact was often huge, as there is evidence of extensive use of colour. 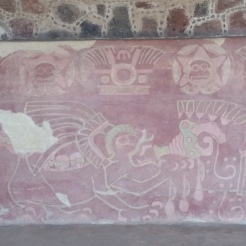 Now, I’ve never had any trouble believing that human beings built amazing things back in the day. My reasoning is that if we can fly into space now, surely it isn’t beyond us to put together an idea of how our ancient peoples built some impressive buildings (determination? patience?). But I have to admit, I really couldn’t wrap my head around a few things.

Firstly, the symmetry. The Temple of the Sun is built in such a way that the arc of the sun moves across its centre – its EXACT centre – on one day a year, and slight variations on others. And the stairs are cut so that the light hits them like this:

Yes, those are tiny people down below!

The stones jutting out on the image above are believed to serve as an indicator of how thick the stucco coating should be, and also as a grappling assistant to those applying it.

Many parts of the ruins have been rebuilt, as shown by the spotted effect made from small stones between the larger ones. This concerned me initially (you can’t just make it up!), until Sergio explained that the whole area is so symmetrical that it was incredibly easy to see exactly what was missing, and where.

The spots indicate that this section has been rebuilt.

There is also the positioning of the pyramids to consider. Both Sun and Moon are built to mirror the shape of the mountains behind them. Walking towards the Moon, Sergio told me keep an eye on the (enormous) mountain behind it (you can see it in the photo above), yet, as I got closer, it had disappeared entirely.

The outline of the Pyramid of the Sun, following the mountain (and with people on top).

The Pyramid of the Moon, but where is the mountain?

These things are bewildering in themselves but, in the end, it was the drainage that brought me undone. The whole area has drainage, and not just any drainage, but an extensive underground system that increases at regular intervals, one degree at a time, to account for the 18m height difference from one end of the area to the other. And every courtyard and room structure has drainage. 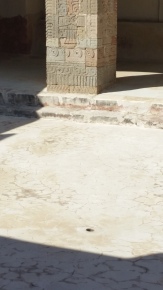 Finally, it isn’t even close to being uncovered. Much like those who worked on the city in the first place, archaeologists could work on this location for a lifetime, without any hope of seeing it in its entirety. There are hills all over the place that have ruins beneath them. 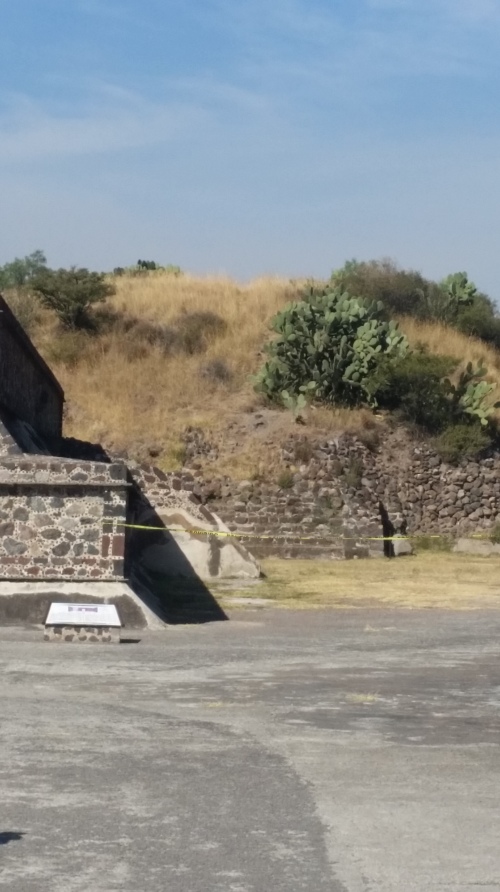 One of the partially uncovered ruins…others just look like hills.

Now, I have always thought that what I lacked in fitness, I more than made up for with sheer determination, but I’m prepared to admit that the final step on the Pyramid of the Moon almost got the better of me. For starters, I didn’t think we were climbing BOTH, and had the horrors when we (finally) made it down the Sun and Sergio started striding towards the Moon. The steps on the Moon are extremely high and steep and my legs had started to shake. On the final step, I literally thought to myself, “Please let me get up!”

Sergio, very helpfully, kept asking me if I wanted a photo taken at certain vantage points, but I elected not to record my sweaty, panting, red-faced self for posterity. What I did do, at Sergio’s suggestion, was to face the four directions, one after another, at the summit of the Pyramid of the Sun, and make a wish for my future, as he did. And I chose to believe that being up there was renewing my energy (if not the step-climbing kind), as he did.

And, despite early start and sun and dust and exhaustion, I chalked up another spectacular day in Mexico City.

Out of season, and expensive, or I may have given something a go.