Eva was suffering from an altitude headache (we’re, like, really high), so I set out on Tuesday morning alone to meet Jose, my guide and translator, who was taking me to his aunt’s restaurant for a day of cooking.

Lety’s, named after Leticia Luna, his aunt and matriarch extraordinaire, is set on a cobbled street in Santo Domingo, which is a low-income neighbourhood in the south of the city. In conversation, it is always referred to as a restaurant, but it feels like a large kitchen and dining room, filled with people who have blurred the lines between cook and diner. Every other person who enters seems to be a part of Lety’s extended family. I particularly enjoyed meeting the children, who all seemed to approach me with genuine delight, hands outstretched and questions at the ready.

Splashes of colour where you least expect them!

Our first step was to visit the local markets to buy our ingredients, which was made up of a truly extraordinary cast of characters – men, women and children alike scraping the spines from cactus leaves, grilling blue corn tortillas, boiling giant vats of meat and slicing the heads off chickens. 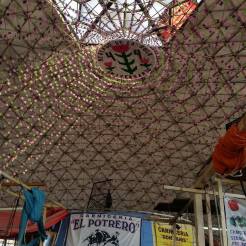 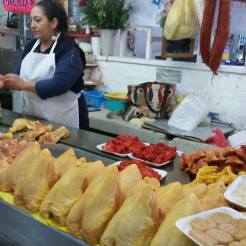 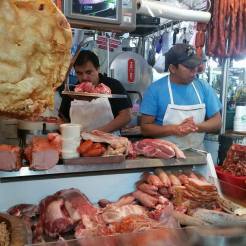 After arriving home with our purchases, and after much discussion, we set about cooking three dishes: chicken and green chillies with sour cream, pork with tomatillo and dried chilli salsa, and red rice, each of which sounded MUCH more exciting in Spanish.

Lety was a wonderful teacher. Some of our exchanges went like this:

Lety tastes (by splashing a bit on her palm with a spoon, then licking it).

“Do you think it needs more salt?” (translated by Jose).

Fiona tastes (almost taking the top layer of skin off her palm in the process).

“I think it tastes good” (translated by Jose). 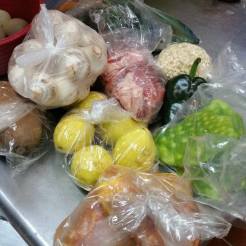 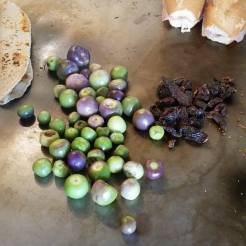 When all had been cooked, the table was ceremoniously set for three, and we all sat down to enjoy the fruits of our labour. And, much as I hate to admit it, words don’t really help here. It’s impossible to describe the smell of the tomatillos and smokey chillies on the open grill, or the taste of the fresh guavas blended into the sugar cane water, or the heat of the food, which doesn’t hit you so much as creep up behind you, hiding behind the flavours, so you only really notice how hot it is when you need to blow your nose.

They also don’t really help to describe the atmosphere. The children coming and going, eating and shouting, the television screening Twilight in Spanish, the diners holding up their baskets for fresh tortillas, the knife man doing his sharpening on the street. And Lety’s family gradually coming to join us and bringing their questions; is Australia an island? is it near Hungary? do we respect the kangaroo? are we happy about qualifying for the World Cup?

Or, how do you make nachos in Australia? *everybody laughs heartily* (it never gets old).

Over dinner, I discovered that Lety is extremely nervous in the days leading up to one of her cooking visits. She worries that the visitor will not like the dishes she has chosen, or that they will be unhappy with the day, and that their dissatisfaction may result in her no longer being asked to host.

I didn’t know the Spanish words to say, “Anyone who complains about a cooking day at your restaurant is a complete and utter arse, Lety, and may they eat bad nachos forever for doing so”, so I just said, “Bueno!” over and over again.

On the drive home, I suddenly realised how tired I was, and told Jose I needed a nap.

“No, I don’t feel sick…just full and tired.” 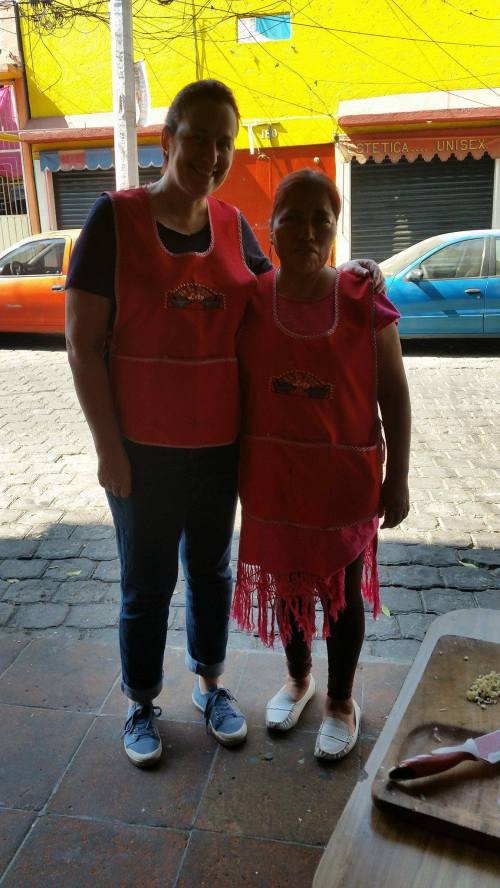 Lety, from the best restaurant in Santo Domingo

4 Comments to “The Pork Sickness”